Iran deal: To the liars go the spoils 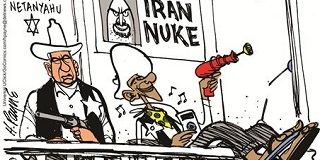 By Yair Lapid, Times of Israel—

It’s not even an insult to say that about them. The fact that the Iranians lie constantly is common knowledge in the global intelligence community. They even give their lies a theological justification: When you believe that you’re engaged in Jihad — a Holy War — a lie isn’t a sin, it’s a tool.

When the Iranian Foreign Minister, Mohammad Zarif, goes on Charlie Rose and says, without batting an eyelid, that “Iran never called for Israel’s destruction” he knows it’s a lie (and so does Charlie). Iran has called for Israel’s destruction hundreds of times, at all levels starting from the Supreme Leader Khamenei in recorded conversations, through to General Qasem Soleimani who is charged with the destruction of Israel in the Revolutionary Guards. But Zarif doesn’t care because he knows that if he lies with enough confidence (and he doesn’t lack confidence) there will be enough people who believe him.

Iran lied about building the enrichment complex in Natanz, lied about the Plutonium reactor in Arak, lied (to the Russians) when they announced a decade ago that they were suspending their uranium enrichment, lied constantly to IAEA inspectors about everything — from the number of centrifuges to the amount of uranium enriched in Fordow — and most importantly lied when they told the world that they weren’t trying to develop nuclear weapons.

Of course those are the less worrying lies. The more worrying lies are the ones we can’t publish, and the even more worrying ones are the ones we don’t know about. There’s no doubt that they lied in the past, they’re lying now and they’ll continue to lie in the future. Why in the future? Because there is no other explanation for their complete rejection, throughout the negotiations, to real inspections of their nuclear program.

Ignore for a moment the never ending flow of disinformation coming from Vienna and Tehran, and ask yourselves one simple question: If the Iranians are going to abide by the agreement, why do they oppose the inspectors being able to do their job without hindrance? If they’re not planning to lie and cheat this time then inspections will only hasten the removal of sanctions.

In my conversations in the White House and with leading Senators during my visit to Washington last month I suggested that inspections be put above all other issues. I explained that there is no point insisting on all the other details of the agreement if the Iranians will anyway cheat.

“Like most Israelis” I said to them, “from the opposition and coalition alike, I think this is a terrible deal which threatens the peace of the world. But even if you disagree you have to find a way to protect yourselves from the possibility that Iranians are signing only to get an easing of the sanctions and then use the money which will flow to them to build nuclear weapons behind the world’s back.”

After all, they have experience. They built two reactors without anyone noticing (it was the Iranian opposition which told the world about Arak and Natanz), they built second generation centrifuges without the world suspecting, enriched uranium to a high degree in Fordow without the world knowing and built missiles which can carry nuclear warheads at Parchin without the world guessing.

Instead of ‘surprise inspections’ without pre-warning, which should have been the minimum demand of the P5+1, an absurd (for lack of a more polite word) agreement was reached called “managed access”. According to that agreement the inspectors will only be able to access nuclear sites with 24 days advanced notice and without free access to the facilities.

I want to repeat that for the sake of clarity: The Iranians demanded and received the right to supervise the supervision. The inspectors will only be able to enter a site after the Iranians receive 24 days to hide their activities and even then they won’t be able to walk around freely to try and uncover the lies.

If that’s not absurd enough then according to the most recent leaks from Vienna they’ve gone back on that as well because it’s “too intrusive.” In other words they’re saying to us, “We’re obviously going to cheat so don’t make it more difficult than it needs to be.”

All that is left for us to hope is that before the United States Senate lifts the sanctions they’ll say the following to the negotiators: “If you believe in this agreement then you should have no problem insisting on surprise inspections. Without that, we won’t be able to remove the sanctions.”

Why? Because the agreement isn’t worth the paper it’s written on if we don’t force the Iranians to stop lying.