Worse than we could have imagined 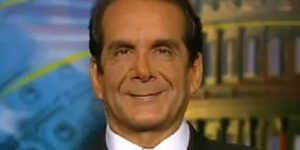 When you write a column, as did I two weeks ago, headlined “The worst agreement in U.S. diplomatic history,” you don’t expect to revisit the issue. We had hit bottom. Or so I thought. Then on Tuesday the final terms of the Iranian nuclear deal were published. I was wrong.

Who would have imagined we would be giving up the conventional arms and ballistic missile embargoes on Iran? In nuclear negotiations?

When asked Wednesday at his news conference why there is nothing in the deal about the American hostages being held by Iran, President Obama explained that this is a separate issue, not part of nuclear talks.

Are conventional weapons not a separate issue? After all, conventional, by definition, means non-nuclear. Why are we giving up the embargoes?

Because Iran, joined by Russia — our “reset” partner — sprung the demand at the last minute, calculating that Obama and Secretary of State John Kerry were so desperate for a deal that they would cave. They did. And have convinced themselves that they scored a victory by delaying the lifting by five to eight years. (Ostensibly. The language is murky. The interval could be considerably shorter.)

Obama claimed in his news conference that it really doesn’t matter, because we can always intercept Iranian arms shipments to, say, Hezbollah.

But wait. Obama has insisted throughout that we are pursuing this Iranian diplomacy to avoid the use of force, yet now blithely discards a previous diplomatic achievement — the arms embargo — by suggesting, no matter, we can just shoot our way to interdiction.

The net effect of this capitulation will be not only to endanger our Middle East allies now under threat from Iran and its proxies, but also to endanger our own naval forces in the Persian Gulf. Imagine how Iran’s acquisition of the most advanced anti-ship missiles would threaten our control over the gulf and the Strait of Hormuz, waterways we have kept open for international commerce for a half-century.

The other major shock in the final deal is what happened to our insistence on “anytime, anywhere” inspections. Under the final agreement, Iran has the right to deny international inspectors access to any undeclared nuclear site. The denial is then adjudicated by a committee — on which Iran sits. It then goes through several other bodies, on all of which Iran sits. Even if the inspectors’ request prevails, the approval process can take 24 days.

And what do you think will be left to be found, left unscrubbed, after 24 days? The whole process is farcical.

The action now shifts to Congress. The debate is being hailed as momentous. It is not. It’s irrelevant.

Congress won’t get to vote on the deal until September. But Obama is taking the agreement to the U.N. Security Council for approval within days . Approval there will cancel all previous U.N. resolutions outlawing and sanctioning Iran’s nuclear activities.

Even if Congress rejects the agreement, do you think the Europeans, the Chinese or the Russians will reinstate sanctions? The result: The United States is left isolated while the rest of the world does thriving business with Iran.

Should Congress then give up? No. Congress needs to act in order to rob this deal of, at least, its domestic legitimacy. Rejection will make little difference on the ground. But it will make it easier for a successor president to legitimately reconsider an executive agreement (Obama dare not call it a treaty — it would be instantly rejected by the Senate) that garnered such pathetically little backing in either house of Congress.

It’s a future hope, but amid dire circumstances. By then, Iran will be flush with cash, legitimized as a normal international actor in good standing, recognized (as Obama once said) as “a very successful regional power.” Stopping Iran from going nuclear at that point will be infinitely more difficult and risky.
Which is Obama’s triumph. He has locked in his folly. He has laid down his legacy, and we will have to live with the consequences for decades.