Why Arabs are so easily offended 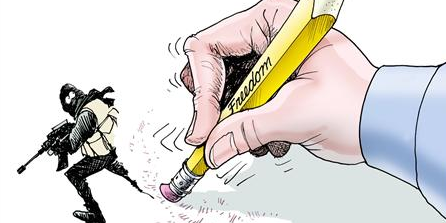 “Who has made us Jews different from all other people? Who has allowed us to suffer so terribly up until now? It is G-d who has made us as we are, but it will be God, too, who will raise us up again. Who knows it might even be our religion from which the world and all peoples learn good, and for that reason and only that reason do we suffer. We can never become just Netherlanders, or just English or representatives of any country for that matter. We will always remain Jews.”
From the diary of Anne Frank, April 11, 1944

“Call me Ishmael”, this famous quote is the opening sentence that opens the novel “Moby Dick” authored by Herman Melville. Ishmael, who is telling the story of Moby Dick, recounts that he is sailing to sea out of a sense of alienation and cultural inadequacy. Ishmael describes the behavior of Captain Ahab who is so relentless in his obsession to kill the great white whale, that he is willing to endanger the entire ship, all of his sailors, just to kill the great white whale. The name Ishmael, the son of the Patriarch Abraham from the old Testament as well as the Koran symbolizes more than anything the sense of being rejected and being scorned my one’s peer’s and by one’s civilization. Ever since the days of Napoleon’s landing upon the shores of Egypt at the very end of the 18th Century and bringing with him the modern era to the Middle East, Islam has been unable to free itself from the shackles of inferiority and self-destructive primal rage that typifies the hatred of modern day Islamic radicalism against Western civilization.

Westerners are brought up to think of anger as a sign of weakness, powerlessness and lack of self-control. In Muslim culture, anger is seen as a sign of strength. To Muslims, being aggressive is a way of gaining respect. When we see pictures of bearded men hopping up and down and shooting in the air, we should take it for what it is: these are the true role models of acceptable behavior.

In Western culture, self-confidence is connected with the ability to meet criticism calmly and to respond rationally. We are raised to see people who easily get angry when criticized, as insecure and immature. In Muslim culture it is the opposite; it is honorable to respond aggressively and to engage in a physical fight in order to scare or force critics to withdraw, even if this results in a prison sentence or even death. They see non-aggressive responses to such threats and violence as a sign of a vulnerability that is to be exploited. They do not interpret a peaceful response as an invitation to enter into a dialogue, diplomacy, intellectual debate, compromise or peaceful coexistence but the opposite.

“Locus of control” is a term used in psychology, and relates to the way in which people feel that their lives are controlled. In Western culture, we are brought up to have an “inner locus of control,” meaning that we see our own inner emotions, reactions, decisions and views as the main deciding factor in our lives. There may be outer circumstances that influence our situation, but in the end, it is our own perception of a situation and the way we handle it that decides our future and our state of mind. The “inner locus of control” leads to increased self-responsibility and motivates people to become able to solve their own problems. Muslims are brought up to have an “outer locus of control.” Their constant use of the term inshallah (“Allah willing”) when talking about the future, as well as the fact that most aspects of their lives are decided by older traditions, clan tribal affiliations and authorities, leaves very little space for individual freedom. Independent initiatives are often severely punished. This shapes their way of thinking, and means that when things go wrong, it is always the fault of others or the situation.

Finally, identity plays a big role when it comes to psychological differences between Muslims and Westerners. Westerners are taught to be open and tolerant toward other cultures, races, religions, etc. This makes us less critical, impairs our ability to discriminate, and makes our societies open to the influence of other cultural trends and values that may not always be constructive. Muslims, on the other hand, are taught again and again that they are superior, and that all others are so inferior that Allah will throw them in hell when they die. Muslim culture’s self-glorification achieves the opposite with their culture and identity. In general, Westerners are taught to be kind, self-assured, self-responsible and tolerant, while Muslims are taught to be aggressive, insecure and intolerant.

The Western tendency to being overly forgiving in response to Muslim aggression and violence is the psychological crowbar that has opened the West to invite escalating Muslim terror against what we know in the West as “the other”, that is those that don’t accept Muslim belief that their religion is superior to all other religions.

Newt Gingrich has stated in the past that “the Islamists cannot reconcile with a secular system of laws. They cannot tolerate a West that maintains a presence in the Arabian Gulf or that would defend Israel’s right to survive as a country. They cannot tolerate freedom of speech, freedom of religion, or freedom for women. In short, their demands are irreconcilable with the modern world. While trying to understand the volatility of millions of Middle Easterners taught from birth to hate America, Europe, and to despise Israel, we in the West should be asking one basic question. The real question to be asked is why we feel the need to pander and apologize to the most radical, violent and intolerant extremes around the world, to let them set the tone; a tone designed to stifle all criticism of Islam, to declare as blasphemy any attempt to reform radical Islam. This more than anything else might explain why Arabs are so easily offended.

The writer, a 25-year veteran of the I.D.F., served as a field mental health officer and Commander of the Central Psychiatric Military Clinic for Reserve Soldiers at Tel-Hashomer. Since retiring from active duty, he provides consultancy services to NGO’s implementing Psycho trauma and Psychoeducation programs to communities in the North and South of Israel and is a strategic advisor to the Chief Foreign Envoy of Judea and Samaria/
Contact: medconf@netvision.net.il