Kerry has declared a war on God 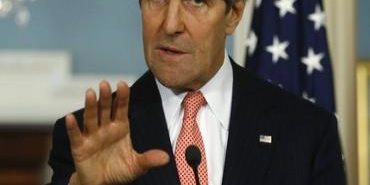 By JEREMY SHARON, JPOST—
Rabbis warn Kerry to stop negotiations “in order to avoid severe Heavenly punishment for everyone involved.”

A group of hard-line nationalist rabbis wrote in an open to letter to US Secretary of State John Kerry that through his current mediation efforts between Israel and Palestinian negotiators he had declared war against God.The rabbis warned that the secretary must cease such activities, to avoid divine punishment.

The letter was sent by the Committee to Save the Land and People of Israel – an activist group opposed to any political accords with the Palestinians involving territorial concessions – founded by Rabbi Shalom Dov Wolpo, who also founded the far-right Our Land of Israel party.

“Your incessant efforts to expropriate integral parts of our Holy Land and hand them over to Abbas’s terrorist gang, amount to a declaration of war against the Creator and Ruler of the universe! For G-d awarded the entire Land of Israel to our ancestors, Abraham, Isaac and Jacob, in order that they bequeath it, as an everlasting inheritance, to their descendants, the Jewish people, until the end of all time,” the letter reads.

The rabbis argue that Kerry’s plan endangers Israeli Jews by bringing them within close range of potential rocket and missile fire from the West Bank should it be ceded by Israel to the Palestinians.

“If you continue on this destructive path, you will ensure your everlasting disgrace in Jewish history for bringing calamity upon the Jewish people,” continued the rabbis, comparing Kerry to Babylonian ruler Nebuchadnezzar II and Roman commander and future emperor Titus, the two enemies of the ancient Jewish kingdoms who destroyed the temples in Jerusalem and Jewish sovereignty in the Land of Israel along with them.

“By the power of our Holy Torah, we admonish you to cease immediately all efforts to achieve these disastrous agreements – in order to avoid severe heavenly punishment for everyone involved,” they threatened.

The letter was signed by Rabbi Wolpo, along with four other rabbis including Rabbi Yisrael Ariel, the founder and chairman of the Temple Institute; Rabbi Yigal Pizam, the dean of a yeshiva and a leader of the Chabad community in the Haifa neighborhood of Kiryat Shmuel; Rabbi Gedalya Axelrod, the emeritus head of the Haifa Rabbinic Court; and Rabbi Ben Tziyon Grossman from the town of Migdal Ha’emek.