Iranian commander: We have targets within America 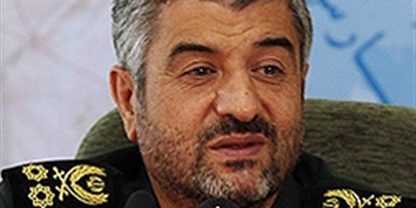 A top commander of Iran’s Revolutionary Guards boasted Saturday that his forces have plans in place to attack the United States from within, should the U.S. attack the Islamic Republic.

“America, with its strategic ignorance, does not have a full understanding of the power of the Islamic Republic,” Brig. Gen. Hossein Salami said in a televised interview. “We have recognized America’s military strategy, and have arranged our abilities, and have identified centers in America that will create a shock.”

Reports indicate that terrorist Hezbollah forces – allies of Iran – have infiltrated the U.S. and have mapped out targets. “We will conduct such a blow in which they will be destroyed from within,” Salami said.

This is the second warning by a high-ranking officer of the Guards in two weeks. The chief commander of the Guards, Maj. Gen. Mohammad Jafari, addressing Secretary of State John Kerry, said on Jan. 24 that a direct conflict with America is the “strongest dream of the faithful and revolutionary men around the world.” Kerry had previously said that if Iran did not live up to the agreement reached in Geneva on its nuclear program, “all options are on the table.”

“Your threats to revolutionary Islam are the best opportunity,” Jafari had said. “Muslim leaders for years have been preparing us for a decisive battle…. Do you know how many thousands of revolutionary Muslims at the heart of the Islamic revolutionary groups around the world are awaiting for you to take this option from the table into action?”

Gen. Salami went further, saying the Revolutionary Guards have taken into consideration America’s military ability and different scenarios under which the U.S. could attack Iran via a limited missile or air strike, or even a ground attack.

“All operational bases of the enemy in the region in whatever capacity and location are within our firepower,” Salami warned. “The American military option does not make a difference for us, and they can use this option, but they will have to accept the responsibility of devastating consequences.”

Salami asked whether America could control the spread of any war with the Islamic Republic: “Can they preserve their vital interest in the region in the face of endless attacks by Iran? Can they keep their naval assets and the Zionist regime secure?” Salami said that with the U.S. economy and debt, America is in no position to engage Iran militarily.

The general then taunted Washington, citing Iran’s political and cultural influence in Iraq. “The current has changed for the Americans so much so that they invest and others benefit.”

Regarding Syria, Salami said the United States does not have the ability to interfere in a country that has been engaged in a civil war for several years. “The Americans cannot even conduct a military operation there,” Salami said. “he conditions and the factors that facilitate the exercise of military power for them have for years been destroyed and today they (the Americans) are in an erosion of political, cultural and military power.”

The general said there are thousands of brigades ready to confront America both within the Islamic Republic and outside the country. He then warned Iran’s politicians to remain strong during the negotiations over Iran’s nuclear program and – based on the might of the country – not give in to U.S. demands.

Iran and the 5+1 world powers (the five permanent U.N. Security Council members plus Germany) reached an interim agreement in Geneva in November over the regime’s illicit nuclear program. Under the six-month agreement, Iran, in return for billions of dollars in sanctions relief, will keep much of its nuclear infrastructure, is limited to enriching uranium at the 5 percent level for six months, will convert its highly enriched uranium of 20 percent to harmless oxide, and will allow more intrusive inspections of its nuclear plants by the International Atomic Energy Agency, which will be limited to searching only agreed-on facilities.

Iran, which has started to implement the first phase of the Geneva agreement, acknowledged receipt of the first installment of released funds and that over $500 million has been deposited into the country’s bank account in Switzerland.

The Islamic Republic spends billions of dollars supporting the terrorist group Hezbollah, its network of terror cells around the world and the Assad regime in Syria solidifying his grip on the country.