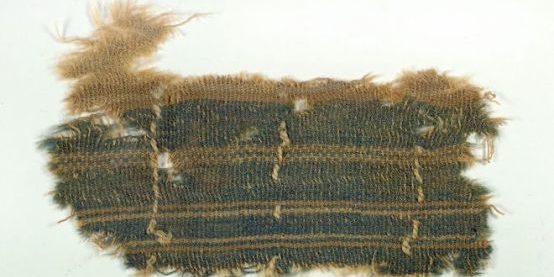 The mysterious source of an ancient blue dye used by the children of Israel on garments, at the command of God through Moses, has been found after 2,000 years.

An Israeli researcher says she has identified fabric that may contain a mysterious blue dye described in the Bible, one of the few remnants of the ancient color ever found.

Naama Sukenik of Israel’s Antiquities Authority said Tuesday that recent examination of a small woolen textile discovered in the 1950s found that the textile was colored with a dye from the Murex trunculus, a snail researchers believe was the source of the biblical blue or purple.

Researchers and rabbis have long searched for the enigmatic color, called tekhelet in Hebrew. The Bible commands Jews to wear a blue fringe on their garments, but the dye was lost after the dispersion of the Jews from the land in the first century.

Sukenik examined the textile for a doctorate at Bar-Ilan University and published the finding at a Jerusalem conference Monday.

The biblical reference to the dye appears in Numbers 15:38-39: “Speak unto the children of Israel, and bid them that they make them fringes in the borders of their garments throughout their generations, and that they put upon the fringe of the borders a ribband of blue: And it shall be unto you for a fringe, that ye may look upon it, and remember all the commandments of the Lord, and do them ; and that ye seek not after your own heart and your own eyes, after which ye use to go a whoring.”

When Israel was scattered by Rome in the first century, the dyeing process used for millennia by the Hebrew people was lost along with the Jewish nation.

Now, 66 years after the rebirth of the Jewish state, researchers are closing in on what they believe to be the source – a mollusk that was over-harvested by Roman royalty, which adopted the color as its own. It became a crime for Jews to wear garments dyed with the color or made in Luz, the ancient Israeli city identified with the manufacture of the fabric.

The Talmud mentions two Jews captured by the Romans for the crime of having “items made in Luz,” the Israeli city identified with the manufacture of tekhelet. There were other rulings against the plebeian population wearing colors deemed royal, including bans by Roman rulers such as Julius Caesar.

The newly recovered biblical process of extracting the purplish blue dye from a Mediterranean mollusk is changing the way the commandment to wear tzitzit – the ritual fringes worn on the four-cornered prayer shawls – is being observed by some Modern Orthodox Jews.

Now, after 2,000 years, it is once again possible to include a blue (tekhelet) thread among one’s fringes, in accordance with God’s instructions to Moses.

Is God’s hand miraculously upholding Israel to this day? Watch “Against All Odds” on DVD!

Tekhelet was one of the few permanent dyes of the biblical era, made from a glandular secretion of the Murex snail called dibromoindirubin, which, after five to 10 minutes of exposure to air and sunlight, turns what’s called “biblical blue,” say Jewish scholars.

Despite rabbinical efforts to maintain use of tekhelet, by the end of the first millennium it was considered lost. Since then, observant Jews have worn white tzitzit.

The dye’s revival is due in part to the initiative of several young Orthodox professionals now living in Israel, mostly graduates of Yeshiva University’s science departments.