Deputy Foreign Minister: Jordan Valley must be under Israeli sovereignty 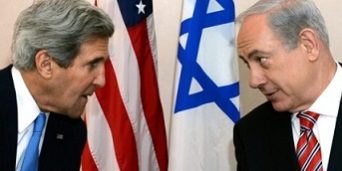 The Jordan Valley must be placed under Israeli sovereignty, Deputy Foreign Minister Ze’ev Elkin (Likud) said on Thursday, as he issued a stern message to visiting US Secretary of State John Kerry against any talk of an Israeli withdrawal to the pre-1967 “Auschwitz borders.”

“We hear more and more talk that we will be asked to give up the Jordan Valley,” said Elkin, hours before Kerry met with Prime Minister Binyamin Netanyahu to discuss details of a final status agreement for a two-state solution.

Out of sensitivity to Kerry’s two-day visit, Netanyahu agreed to hold off on announcing any new building over the pre-1967 lines.

But politicians representing all the parties in Netanyahu’s coalition, except for Hatnua, made a solidarity visit to the Jordan Valley on Thursday.

Many of them, stopped at the Gitit settlement, located 37 kilometers over the Green Line, to celebrate a building project of 16 new homes in the hilltop community of 300 people.

As photographers snapped pictures, Interior Minister Gideon Sa’ar (Likud), wearing a suit and sunglasses, symbolically poured a pail of cement onto the foundation of a new home.

A number of politicians also planted a tree.

The 15 politicians, many from the Knesset Land of Israel lobby group, were greeted by small children waving Israeli flags and wearing T-shirts that read, “The Jordan Valley, an Israeli success story.”

The visit, said Elkin, as he stood at a small podium specially set up for the event, “is the right act at the right time.”

He said that when Kerry and Netanyahu speak of the Jordan Valley, “this tour will have sent a clear message.”

In Jerusalem, Netanyahu said, “I will never compromise on the security of Israel and its citizens, or on the vital interests that protect our future.”

Elkin, however, said that the Jordan Valley was essential for Israel’s security, and that Kerry’s attempt to safeguard Israel without it is futile.

“There is no terminology that can marry the ‘67 borders and security. There is only one answer to any suggestion to this effect and that is: No,” said Elkin.

At one time, he said, there was a clear consensus, in support of the Jordan Valley, on the Israeli Right and Left, Elkin said.

Former Labor prime minister Yitzhak Rabin believed Israel should retain the valley, Elkin said. “With his opinions, he could not have been chosen in the Labor primary. He was not willing to let go of the Jordan Valley. He was not prepared to accept the 67 lines.”

Elkin emphasized that “‘67 borders are Auschwitz borders,” quoting former foreign minister Abba Eban, who served in both the Mapai and Labor parties.

“We are interested in continuing with the negotiations. It is right to speak with our neighbors. But in order to continue the we can’t be asked to give up on things critical for Israel’s security,” Elkin said.

Sa’ar thanked the residents of Gitit for helping secure the State of Israel.

Looking out at the residents who had come to listen to the parliamentarians, he said, “we have come here to strengthen you in your mission as our emissaries.”

“The question is, where will Israel’s eastern border be? At the Jordan River or God forbid, near Netanya or Kfar Saba,” Sa’ar said.

“Israel won’t have any strategic depth without the Jordan Valley,” he said.

“It’s clear that if the settlements are not there, then the IDF won’t be there. And if the IDF isn’t there then terror will be there,” Sa’ar said. “It is wrong to precondition peace on the withdrawal of Jewish settlements. This can not bring peace.”

MK Miri Regev (Likud) thanked Sa’ar for his support of her bill to annex the Jordan Valley, which on Sunday passed its first legislative hurdle before being stymied by Justice Minister Tzipi Livni (Yesh Atid).

She called Sa’ar the “leader of the Right” and that it was clear to her that the legislation would not have passed without his help.

Regev called Livni a “cry-baby” for appealing the legislation.

“Now Gideon you have a mission to ensure that the appeal is withdrawn,” she said.

The sky did not fall in the past when Israel annexed the Golan Heights and east Jerusalem and it won’t fall if Israel annexes the Jordan Valley, the MK added.

MK Tzipi Hotovely reminded everyone that the larger issue was retaining all the settlements in Judea and Samaria and not just the Jordan Valley.

Coalition chairman MK Yariv Levin said it was important to remember that the primary issue was also Israel’s right to the land over the pre-1967 lines, and not just the security issues related to the Jordan Valley.

“We are here with a clear message for the prime minister. You have a strong coalition to preserve the Jordan Valley,” Levin said.

Later in the day, the Bayit Yehudi party published a satirical video on YouTube against US plans for the Jordan Valley, done as if it was for an upcoming summer action film, called “American Bluff.”

It said, “They have blocked Iran’s nuclear program, ended the civil war in Syria and brought peace to the streets of Egypt. Now they are coming back… “This summer Israel can forget about Iron Dome, give up deterrent force and stop their prayers, because the United States of America will protect the Valley,” states the video.

It ends with the words, “only the IDF can protect the state of Israel.”