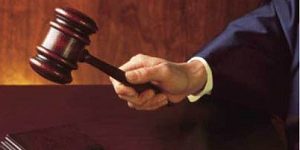 Supporting sanctions against Iran is understood to be a position designed to moderate Iranian behavior regarding the acquisition of nuclear capability. It is the position of people and countries that do not want to contemplate military action by either the United States or Israel. It is the position of the European Union, the UN, Congress, the U.S. President, and Israel. As such, giving sanctions as much backbone as possible seemed an unassailable position — until Iranians began to sue in European courts to see the evidence against them. In a pattern of behavior disconnected from the possibility that they are aiding the Islamic Republic ‘s nuclear programs, European courts are obliging them.

If Iran’s acquisition of nuclear technology is a legal problem, the theory is, Iran has the same rights in Western courts as an accountant accused of stealing from the firm. But if, as many believe, Iran is planning to acquire nuclear weapons for the war in which it claims it will engage with Israel and the West, its use of the Western legal system is Lawfare (coined by Maj. Gen. Charles Dunlap; meaning “the use of the law as a weapon of war”). The Lawfare Project defines it as, “The abuse of Western laws and judicial systems to achieve strategic military or political ends.” Those ends appear to include using Western companies as a conduit for technology and financing.

Proving the link between banks or commercial enterprises and Iran’s nuclear program is frequently a matter of good intelligence, but European courts have no mechanism for keeping information secret once it is introduced, and European governments have been unwilling to compromise their information and their sources. Iran’s Bank Mellat, one of the biggest private lenders, sued in the EU General Court to challenge a 2010 freeze of its assets. It won. The court wrote that the EU was, “in breach of the obligation to state reasons and the obligation to disclose to the applicant… the evidence adduced against it.” The EU had “breached the bank’s right of defense.”

Iran’s lawyers reveled in the wonders of courts in free countries.

Reuters quoted one Maya Lester, “who represents companies and individuals in litigation concerning European sanctions, including the Iranian central bank and the country’s main tanker company, NITC,” saying, “It may be politically embarrassing, but in terms of upholding the rule of law, what the European court has done is impressive and quite brave. It shows it to be a court upholding human rights … which is not easy given how political Iranian sanctions are.”

Mentioning Iran and human rights on the same side of the same sentence is awkward enough, but there is a second problem. British courts do, indeed, have a mechanism for closed testimony on national security matters. Bank Mellat sued in Britain to have restrictions lifted and the British government produced its arguments in secret. But the court not only sided with Bank Mellat, it slammed the government for using classified information. That it did not find the secret evidence compelling is fair enough. “It turned out that there had been no point in the supreme court seeing the closed judgment , because there was nothing in it which could have affected reasoning in relation to the substantive appeal.” But the judges went further: “If the court strongly suspects that nothing in the closed material is likely to affect the outcome of the appeal, it should not order a closed hearing. Appellate courts should be robust about acceding to applications to go into closed session or even to look at closed material.”

In other words, said the British justices, the court should have a presumption against hearing classified information from the government. Again, if a London accountant is accused of embezzlement, the likelihood of needing a closed session is remote; in national security cases, it is not — but the judges admit no difference among defendants.

A lawyer for a group supporting the Iranians said, “Proud principles of open justice and the rule of law are casualties as the secret justice disease infects the highest court in the land. Today’s chilling judgment brutally exposes the government’s claims and lays bare its willingness to overstate the importance of secrecy to serve its own ends.”

The U.S. government and several of its European allies are becoming concerned that the legal basis for sanctions on Iran may be coming unraveled, and well they should. But the problem of sanctions is not only the legal point, there are two others:

First, there is international collusion with Iran. Iran cheats and Western banks, governments and companies help it — as do the Russians and the Chinese. New York State’s attempts to uncover Iran’s illicit money transfers by Standard Chartered Bank and its accomplice, the very well respected Deloitte & Touche, is instructive. A four-year investigation uncovered 60,000 secret transactions covering more than $250 billion dollars, and collusion in both the U.S. and the UK. Furthermore, some countries have financial interests in Iran that could be harmed. Sweden, for example, opposed the last round of sanctions because of an Ericsson telecom deal that provided the mullahs with more up-to-date technology to track the opposition through their cell phones. The volume of Germany’s trade with Iran is 4 billion euros.

Second, although sanctions have caused serious economic dislocation for the people of Iran, there is little evidence that economic sanctions force governments to change their national strategy. People starved in North Korea, while the well-fed Kim Jong-Un’s nuclear and missile programs continued apace, shipping in new, illegal, weapons and threatening neighbors. The Castro brothers have never missed even a cigar after decades of U.S. sanctions. Saddam and his sons lived palatial splendor even as the UN reported that 60,000 Iraqi children died annually as a result of sanctions-related medical and nutritional problems. And Russia, China, India and seven other countries have U.S.-supplied waivers on the purchase of Iranian oil, helping to provide Islamic Republic with hard currency.

Iran’s nuclear program is outside UN inspection. Iranian “advisors,” money and weapons make it party to the monstrous violence against civilians in Syria. It threatens the West with war and Israel with eradication both directly and with financial and military support to Hamas and Hezb’allah. Domestically, Iran has the world’s second-highest (to China) capital punishment, including dozens of public hangings. Homosexual sex and adultery (based on men’s testimony alone) are punishable by death, and women are subject to assault by “modesty police.” Demonstrators have been shot in the streets.

Iran’s interest in Western standards of law and justice goes no farther than its interest in using our laws against us. For those who believe — or hope — that economic sanctions can cripple the Mullah’s race toward nuclear capability and possibly even aid in the regime’s demise, it is disheartening to find European courts apparently neutral between the West and those who wage war upon it.