Extremism Escalating in the West Bank 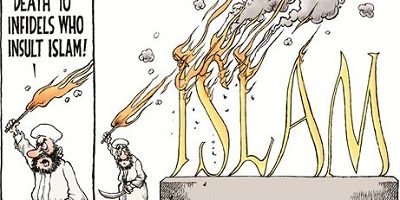 What happened at the al-Aqsa Mosque during last week’s Friday prayers should be sounding alarm bells in the U.S., Britain and France.

After the prayers, during a demonstration in support of Egypt’s deposed President Mohamed Morsi, thousands of Muslims began shouting slogans against the U.S., Britain, France and Israel.

“Allahu Akbar, destroy the U.S., Britain and France!” the demonstrators chanted in scenes that appeared as if they were taking place in a remote Taliban-controlled village in Afghanistan.

But the protest did not take place in Afghanistan or Pakistan. It took place at the Aqsa Mosque during the holy month of Ramadan, during which Israel allows hundreds of thousands of Palestinians from the West Bank to enter Jerusalem for Friday prayers.

Why did the Muslim worshippers chant slogans against the US, Britain and France? Because they believe that these countries are the enemies of Islam and were involved in the “conspiracy” to remove the Muslim Brotherhood from power in Egypt.

But of course such demonstrations cannot occur without also shouting threats and slogans against Jews.

Why Jews? Because the declared goal of these extremists is to destroy Israel and establish an Islamic Caliphate.

It is frightening to see thousands of Muslims chanting, “Khaybar, Khaybar Jews — the army of Mohamed will return!”

They were referring of course to the Battle of Khaybar, fought in the year 629, between Muslims and Jews living in the oasis of Khaybar in the Arabian Peninsula.

The Jews there were attacked after being accused by the Muslims of inciting hostilities among Arab tribes. The Jews finally surrendered and were permitted to live in Khaybar on condition that they gave one-half of their produce to Muslims.

The demonstrators at the Aqsa Mosque are hoping that the Muslims will again attack the Jews, this time in Israel, and force them to succumb, and either to leave or agree to live as a humiliated minority under the rule of an Islamic Caliph.

What is worrying is that some of these demonstrators were Israeli citizens affiliated with the Islamic Movement in Israel, headed by Sheikh Raed Salah. This movement, affiliated with the Muslim Brotherhood and Hamas, has thousands of supporters among the Arab community inside Israel.

Two days later, on Sunday, the Islamic Movement organized another demonstration in support of Morsi and the Muslim Brotherhood in Egypt, this time in northern Israel.

The anti-Jewish demonstration in Jerusalem’s Al-Aqsa Mosque is a sign of the growing power of Muslim extremists in the city and the West Bank.

This is a real and imminent threat not only to Israel and its Western allies, but also to Palestinian Authority President Mahmoud Abbas and his loyalists in the West Bank.

This threat also explains why the Palestinian Authority rushed to condemn the extremists for using the Aqsa Mosque as a platform for “advancing outside agendas” — namely that of the Muslim Brotherhood and other radical Islamic groups.

The thousands of demonstrators did not forget to condemn the Palestinian Authority for “selling out to Jews” and accepting a two-state solution instead of seeking Israel’s destruction.

The anti-Jewish and anti-American tirade came as U.S. Secretary of State John Kerry resumed his efforts to force Abbas and the Palestinian Authority leadership to return to the negotiating table with Israel.

Even if Abbas agreed to return to the negotiating table, he would always be afraid of the extremists, who are expected to step up their attacks on him as the talks with Israel proceed.

Unlike Kerry, Abbas sees and hears the voices of the extremists at the Aqsa Mosque and other Islamic holy sites in the West Bank and Gaza Strip. And this is precisely why Abbas will never agree to sign a peace deal with Israel: it would turn him into the biggest traitor in the the Palestinian and Islamic world.