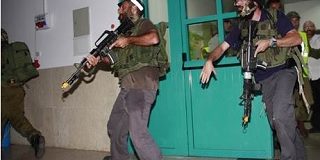 Security teams in Beit El in the Binyamin region held a drill this week that mimicked a large-scale terrorist infiltration targeting local schools.

“The ‘incident’ started with firebombs and rock throwing.  From there it progressed to two terrorists in Bnei Tzvi , there were about eight wounded there. Then we got a report about an incident in the girls’ high school,” a local security commander described the drill.

There would eight “wounded” in the girls’ high school, too, he said, and the fake terrorists were taken out.

“There is no doubt that Beit El is now much more prepared,” trainer Ehud Deriban told Arutz Sheva.

The town’s security team “knows how to work as a single force on the tactical level… it knows how to send forces in to the scene of an attack in a controlled way,” he explained.