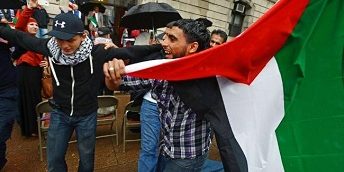 The raising of a flag Sunday at Paterson’s City Hall in New Jersey was like any of the dozen or so similar events held in the city each year in a nod to its diversity.

That’s because the flag raised — for the first time in Paterson, and possibly at any city hall in the United States — was Palestinian. Symbols or assertions of Palestinian statehood are fraught with political sensitivities, and Khader Abuassab, the event’s organizer, said he received harassing phone calls and a text reading “Drop dead” before Sunday’s event.

But no problems were on display Sunday when the flag was raised in the rain before elected officials and about 150 people. People cheered, danced, shared sweets and shouted, “Long Live Palestine.”

“Palestine is our country and we are proud of that,” said Clifton, N.J., resident Salwa Ramadan. “We’re happy (to be) recognized finally.”
Paterson had never held the event because no one had asked, Mayor Jeffery Jones said. The mayor read a proclamation proclaiming May 19 as Palestinian American Day in the city and honoring the group’s heritage and contributions.

He said he wasn’t concerned with potential political backlash.

“If they’re citizens of the city of Paterson, they have every right to raise the flag,” Jones said. “There’s nothing that precludes them as long as they follow the process.” Turks, Haitians, Peruvians and other groups have had had their flags raised at City Hall.

Riyad Mansour, the Palestinian ambassador to the United Nations, said in a speech that the Palestinian leadership thanked the city for its gesture. He urged local Palestinians to be good citizens and to continue supporting the struggle for justice in Palestine.

Many Palestinian Americans live and run businesses in South Paterson, an area some call “Little Ramallah” after the West Bank city. Abuassab, a member of the Arab American Civic Organization, said it was time the community was recognized.

He put ads in Arabic newspapers about the flag raising and texted an invitation to friends, community leaders, politicians and law enforcement officials.

He said he got some calls from blocked numbers cursing him. One text message, Abuassab said, came from the phone of Charles Meyers, business administrator in the Passaic County Sheriff’s Office and former acting sheriff. Abuassab said the text said simply: “Drop dead.”

Meyers denied sending it in an interview Friday, although he later answered the phone number that was the source of the text.

“I look forward to an investigation to prove that it’s not true,” he said.

Bill Maer, spokesman for the Sheriff’s Office, said it was investigating the complaint.

Local and national Arab-American leaders say they can’t recall any other U.S. municipality or agency endorsing a Palestinian flag-raising.