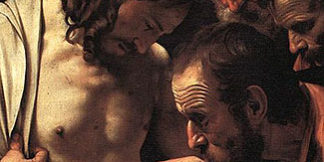 “Blessed are those who have not seen and yet have believed.’” John 20:29

Long before 14-day extended forecasts and www.weather.com, a man purchased an extremely sensitive barometer from a highly respected company.  Upon its delivery to his sunny Long Island address, frustration immediately began to build for the man, for he found that the indicating needle had malfunctioned and would only point to the sector marked “HURRICANE.”  Tapping and even shaking the barometer failed to dislodge the needle.  Frustration having now turned to anger the gentleman penned a letter of complaint to the store and mailed it the next morning on the way to his job in New York City.  Returning to his home at the end of the day the man could not find his new barometer, nor for that matter could he find his home.  Long Island had been leveled by the historic hurricane of September 1938.  The barometer had been functioning perfectly.  Sometimes the evidence is right in front of us, but we won’t believe until our house is leveled.

Thomas, one of Jesus’ twelve disciples, had all the evidence he needed to believe, but doubt robbed him of the blessings of faith.  In John 20:24-29 we read about his journey of faith, “But Thomas, called Didymus , one of the twelve, was not with when Jesus came .  The other disciples therefore said to him, ‘We have seen the Lord.’  But he said to them, ‘Unless I see in His hands the print of the nails, and put my finger into the print of the nails, and put my hand into His side, I will not believe.’  After eight days his disciples were again inside, and Thomas with them.  Jesus came, the doors being shut, and stood in the midst, and said, ‘Peace to you!’  Then He said to Thomas, ‘Reach your fingers here, and look at My hands; and reach your hand here, and put it into My side.  Do not be unbelieving, but believing.’  Thomas answered and said to Him, ‘My Lord and my God!’  Jesus said to him, ‘Thomas, because you have seen Me, you have believed.  Blessed are those who have not seen and yet have believed.’”

The historical evidence points clearly to a resurrected Jesus.  Do you believe?  Don’t wait until your house is leveled.

r. Daniel McCabe is the pastor of Faith Bible Church in Spring, Texas. He is a contributing editor for The Jerusalem Connection Report. He can be reached via email at danielmccabe@juno.com.