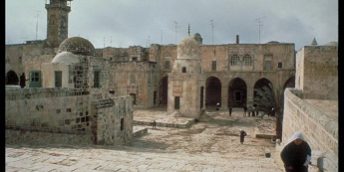 Palestinian political and religious figures over the weekend warned US President Barack Obama that he should probably avoid ascending Jerusalem’s Temple Mount during his upcoming visit to Israel, but provided a list of instructions should he go ahead with a stop at the contentious holy site.

The White House has not said a word of Obama going to the Temple Mount during next month’s visit, but Palestinian leaders are fairly certain the American leader will want to do so. If that is the case, Obama better follow the Muslims’ rules, they said.

First of all, Palestinian Authority (PA) official in charge of Jerusalem affairs, Hatem Abdel Qader, said Obama must not coordinate any Temple Mount visit with the Israeli authorities, but must rather approach either the PA or Jordan for permission.

Further to that, Sheikh Ikrima Sabri, head of the Waqf Islamic Trust that oversees the Temple Mount, insisted that Obama must enter the compound via the Lion’s Gate, which has Muslim guards, rather than the Mughrabi Gate (near the Western Wall), which is guarded by Israeli police.

In this way, Sabri said the “Muslim sovereignty” over the Temple Mount will be preserved. Sabri also cautioned Obama not to bring any Israeli officials with him to what is in reality Judaism’s most holy site.

At an event with Sabri, Sheikh Raed Salah, head of the Islamic Movement in Israel, said that should Obama follow all these rules, he will be welcome at the Al Aqsa Mosque that currently occupies the Temple Mount.

“The US president is likely to visit the Aqsa Mosque, but we should affirm that our position towards such situation will be in conformity with the constants of the Muslim and Arab nations, and the Palestinian people as well as with the issue of Jerusalem and the Aqsa Mosque,” said Salah.