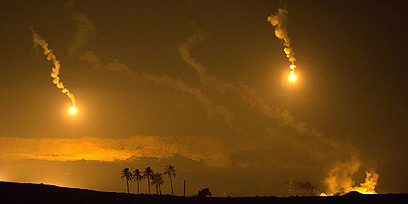 A diplomatic push to end the hostilities between Israel and Gaza terror groups gained momentum Tuesday, with Egypt’s president predicting that airstrikes would soon end, the US secretary of state racing to the region and Prime Minister Benjamin Netanyahu saying the Jewish state would be a “willing partner” to a ceasefire with Hamas.

As international diplomats worked to cement a deal, a senior Hamas official said an agreement was close even as relentless airstrikes and rocket attacks between the two sides continued. The Israeli death toll rose to five Tuesday with the deaths of an Israeli soldier and a civilian contractor. More than 130 Palestinians were reported killed.

US Secretary of State Hillary Rodham Clinton held a late-night meeting with Netanyahu after rushing to the region from Cambodia, where she had accompanied President Barack Obama on a visit.

”The goal must be a durable outcome that promotes regional stability and advances the security and legitimate aspirations of Israelis and Palestinians alike,” she said at a news conference with Netanyahu.

Netanyahu said Israel would welcome a diplomatic solution to the crisis but threatened further military activity, saying he was ready to take “whatever action” is necessary.

The comments came after conflicting reports on whether a deal was imminent.

“We haven’t struck the deal yet, but we are progressing and it will most likely be tonight,” Moussa Abu Marzouk said earlier Tuesday from Cairo, where ceasefire talks were being held. A second Hamas official, Izzat Risheq, said later that a deal might not be reached.

Egyptian President Mohammed Morsi, perhaps the most important interlocutor between Hamas and the Israelis, said the negotiations between the two sides would yield “positive results” during the coming hours.

Israeli officials said only that “intensive efforts” were under way to end the fighting.

As the seventh day of Israel’s offensive on Gaza approached its conclusion, the IDF stepped up its attacks on terror hubs and other strategic targets across the enclave. In what appeared to be a last-minute burst of heavy fire, Israeli tanks, artillery forces, fighter jets and helicopters intensified the strikes, as per IDF Chief of Staff Lt.-Gen. Benny Gantz’s orders.

Artillery fire primarily targeted areas in northern Gaza. The army struck a Hamas command center, a bank used by the terror group, an apartment used as a military hideaway and a meeting place frequented by terror operatives on Tuesday night.

Tunnels used to store munitions and smuggle fuel were also targeted, as were several weapon factories and caches. The smuggling tunnels are one of Hamas’ most critical sources of financing, the army said.

IAF aircraft continued to bomb terror cells attempting to fire rockets and anti-tank missiles, as well as other operatives across Gaza.

Earlier Tuesday the army airdropped fliers warning residents of northern Gaza neighborhoods to evacuate their homes and move towards the center of the Strip. Hamas, in turn, urged the residents to stay, saying the leaflets were means of psychological warfare.

The Associated Press reported that one airstrike killed two brothers riding on a motorcycle, while another killed three Palestinian journalists in their cars.

Two of those killed were cameramen working for Al Aqsa TV, the centerpiece of a growing Hamas media empire, said station head Mohammed Thouraya. The two were driving in a car with press markings in Gaza City on Tuesday afternoon, shortly after wrapping up an assignment at the city’s Shifa Hospital, Thouraya added.

Israel acknowledged targeting the men, claiming they had ties to militants.

After several relatively quiet hours on the Israeli side of the border, four rockets exploded in the Eshkol Regional Council without causing injuries or damage.

Earlier Tuesday barrages of projectiles fired towards the council killed a soldier and a civilian, driving up the death toll on the Israeli side to five since Operation Pillar of Defense began last Wednesday.

For the first time, a Fajr-5 type rocket fired from Gaza has hit a populated area in central Israel, striking the top floor of an apartment building in the town of Rishon Lezion. Two people were lightly hurt.