Who Is Really Besieging Gaza? 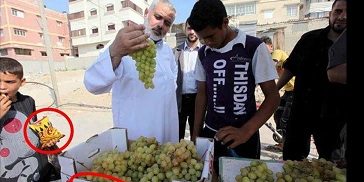 A photo of the “Prime Minister” of Hamas’s government in the Gaza Strip, Ismail Haniyeh, buying Israeli grapes in Gaza, with a boy standing next to him enjoying a bag of Israeli chips has been circulating online among Palestinians.

The photo is an example of the hypocrisy of the senior Hamas leader, as his group and its sympathizers in the West and in Muslim countries have been advocating a universal boycott of Israeli products. The photo of Haniyeh buying Israeli grapes also ridicules those across the world claiming that people in Gaza are starving to death under a “terrifying” Israeli siege. An Israeli siege, in fact, might be exactly what Hamas’s leaders want to bring about, both to try to hurt Israel economically and at the same time to gain global political and financial support for themselves while Gazans are suffering under Hamas’s rule.

Before Haniyeh’s picture became an internet sensation — distributed by Palestinians over social websites such as Facebook — just this past August, former PA security chief Muhammad Dahlan said that Gaza was “not under siege,” and that its residents were “not lacking anything.” Dahlan was expelled from Fatah in 2011 following a dispute with PA president Mahmoud Abbas, a circumstance which possibly gives him more freedom to speak his mind.

Dahlan is not alone in his assessment. In July 2010, Egyptian journalist Ashraf Abu Al-Houl wrote in Al-Ahram (Egypt’s most prominent newspaper) that “in actual terms” Gaza is not under siege. He further noted that stores were “flowing with goods” at “low prices.” Abu Al-Houl went as far as detailing the thriving entertainment and amusement parks industry in Gaza.

Still, in the global media, the notion of Gaza being under an “inhumane” Israeli siege is alive and well. Weeks after Dahlan’s statement, the United Nations released a report stating that “he situation in the Palestinian enclave has reached a critical point. If no action is taken, by 2020, Gaza will become uninhabitable” — noting that Israel is to blame for the conditions in Gaza.

Ironically, throughout all of the alleged Israeli siege on Gaza, Israel has consistently been providing Gazans water and power supplies, which Israel threatened to cut in 2011 if Palestinian Authority pursued reunification with Hamas — a threat which Israel never carried out.

Moreover, numbers speak for themselves: in March 2012, the same month when 300 Hamas rockets were fired from Gaza at Israeli towns, 3,653 truckloads of goods were delivered from Israel to Gaza and 1,375 Gazan patients and companions entered or passed through Israel for medical treatments, followed by another 1,364 in April, 2012.

In August 2012, the Hamas prime minister’s brother in law was allowed to enter Israel for treatment in an Israeli hospital.

This is the same Haniyeh who visited Tunis in 2011 by invitation from its Islamist-dominated parliament and told the welcoming crowd, “We shall not relinquish Palestine,” to which the crowd chanted: “Killing Jews is A Duty”.

To understand Hamas’s motives, apart from the presumed public relations gains to be amassed by “sticking it to Israel,” it might help to know that the Washington Institute for Near East Policy released a report in 2011 stating that the estimated tunnel trade between Gaza and Egypt had “likely peaked at around $600-850 million per year,” and noted that Hamas takes a hefty cut from the Egyptian tunnel trade, “imposing high ‘customs’ duties and a daily fee on local tunnel contractors.” According to the report, the tunnel trade had been dramatically reduced since June 2010, when Israel quadrupled the number of trucks permitted to bring goods to Gaza through legal terminals. It is therefore in Hamas’s best interest to keep the blockade alive to secure larger revenues for its Gaza government, all the while demonizing Israel and causing Gaza’s residents to suffer, thereby making them even more dependent on Hamas.

At the same time, Hamas manages to get the world’s sympathy in the name of the blockade, as well as the world’s cash: Qatar, for example, recently allocated $400 million as aid money for Gaza. Of course, how decent Hamas will be at handling those funds is anyone’s guess.

It is Hamas, not Israel, which is besieging Gaza. Those who claim to be concerned about the Palestinians in Gaza would actually do more good for these fine people if they stopped attacking Israel and instead switched their focus to addressing the true source of the Gazans’ poverty, suffering and oppression: Hamas.