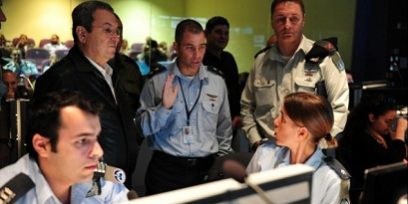 by TIMES OF ISRAEL—

Israel conducted an air defense drill on Monday, simulating a possible attack on the country by Syrian and Iranian long-range missiles.

The exercise, overseen by Defense Minister Ehud Barak and performed in conjunction with the United States, saw the successful test launch of four Patriot missiles from central Israel into the Mediterranean sea.

About 2,500 American troops, and an equal number of IDF personnel, took part in the drill.

“It is, first of all, an expression of the deep cooperation between our two countries,” Barak said of the launch. The defense minister explained that the exercise was designed to test older systems of missile defense and ensure that they work in conjunction with “the most modern,” the Iron Dome.

“Iron Dome is repeatedly intercepting missiles aimed at our communities,” Barak added, speaking about the dramatic escalation of rocket attacks from Gaza since Saturday, in which the Iron Dome system has been deployed to intercept a series of missiles heading for population centers in Beersheba, Ashkelon and other southern areas.

“These are very important days, both for advancing our collaboration on missile defense, and for our ongoing response to Hamas and the terror organizations in Gaza — which may intensify and expand.”