Brotherhood: "The Sphinx and Pyramids Must be Destroyed" 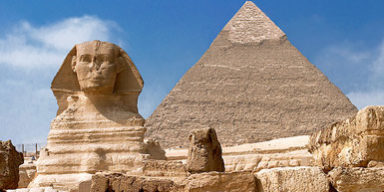 Egypt’s Muslim fundamentalists are now calling for the destruction of the Pyramids and the Great Sphinx of Giza under the pretext that Islam prohibits idols.

If the extremists have no respect for human life, why should they care about a pyramid or a statue?

Murjan Salem al-Johari, one of Egyptian leaders of the Saudi-inspired Wahhabis, otherwise referred to as the “Salafis,” said that it was the duty of all Muslims to destroy the Pyramids and the Great Sphinx just as the Taliban destroyed two ancient statues of the Buddha in Afghanistan in 2001.

“All statues in Egypt must be destroyed,” al-Johrai declared in a TV interview. “Muslims must implement the rules of Sharia and we will destroy the statues of Sphinx and the Pyramids because they are idols.”

The call for destroying the Pyramids and the Great Sphinx came after Muslim extremists destroyed, earlier this year, priceless Buddhist statues in the Maldives.

In 2001, the Taliban destroyed irreplaceable historic artifacts in Afghanistan after its leader issued a fatwa against all “idolatrous images” of humans and animals.

The call for destroying the Pyramids and the Great Sphinx of Giza is yet another sign of the growing influence of the “Salafis” and other radical Islamic groups in Egypt in the aftermath of the “Arab Spring.”

There is not much that Egypt’s Muslim Brotherhood president, Mohamed Morsi, can do to stop these extremists from achieving their goal.

Instead of directing his protests against the Muslim terrorists who are intimidating Egyptian Christians and threatening to blow up the Pyramids and the great Sphinx, Morsi is busy trying to stop Israel from defending itself against the rockets and missiles launched from the Gaza Strip by Hamas and other terror groups.

Morsi has thus far failed to liberate Sinai from the control of the extremists, who have turned the peninsula into a terror entity. If the Egyptian army was unable to prevent the killing of 16 border guards by Muslim terrorists in its own base in the Sinai, how is it expected to protect the Pyramids and the Great Sphinx?