The empty chair has spoken 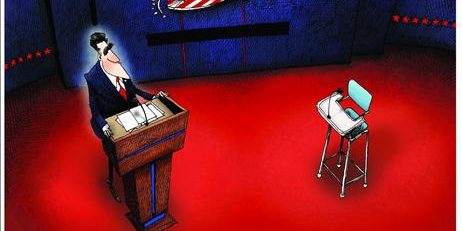 President Obama, after serving nearly four years in the White House should have been able to easily clarify on the state of the American economy. Obama should have been able to easily explain why re-electing him would fix America’s problems despite his first term’s lackluster performance record. Yet just when Obama had the opportunity to share with all of us his words of wisdom and connect to 62 million Americans watching the debate, we got to see Obama in his natural state: seemingly out of focus, unsure of what he is talking about, and uncomfortable with having to go beyond terse sound-bites, a benchmark of his communication skills for the past four years. His lack of ability to explain himself without the protective shield of the enlisted media, his inability to convey a basic sense of trust between himself and the American public only reinforces the doubts that so many of the American public harbor from all sides of the political field. This basic lack of trust between the President and the general public is probably what makes many American’s so distrustful of who Obama really is, in addition to a lack of any substantial previous public record that demonstrates otherwise. The only possible conclusion that can be made is that Obama’s natural capabilities are far more limited and far more mediocre than Americans have been led to believe.

With the heightened focus and attention of the American public in response to the first Presidential debate, and the renewed doubts of Obama’s competence to remain President, it was expected that the Vice-Presidential debate between Joe Biden and Paul Ryan would take on a strategic significance and would represent the White House’s response showing just how desperate the Democratic party and its leader Obama are. It was only natural that Joe Biden would come out slugging, likewise it was expected that the moderator would enable Biden to more or less say anything he wishes without interruption. Biden’s attempt to generate an appropriate response to Obama’s losing battle at the polls since the debate against Romney fell flat. Despite Democratic and liberals being obsessed over Biden’s combativeness and mocking tone as he interrupted Ryan 82 times in 90 minutes, rather than convincing the viewers why Obama needs four more years, Biden willingly and intentionally attempted to demonize his Republican opponent. This kind of behavior eclipses routine nastiness we’ve become accustomed to during elections and has become the mainstay of the Obama campaign against Romney and the Republican Party. Biden evidently found a way to outdo and be even worse than Obama. He laughed and sneered his way through the debate, lecturing the American people, only because even Biden couldn’t defend Obama and his lack of a record to run on.

The last time that Joe Biden opened up his mouth big time, slugging away, with the intention of attacking the Republican party was during this past summer when at a campaign appearance in Danville, Virginia; he claimed the GOP would revive slavery, yes my friends, nothing less. Pronouncing a Southern drawl for the benefit of his south Virginia audience, Biden lambasted the benefits of a free market economy enabling Wall Street to create more prosperity by unchaining Wall Street. Biden retorted; “they going to put y’all back in chains.” Despite all attempts at damage control, Biden’s outburst was a clear-cut case of racial incitement. After all, unless he is referring to Ancient Egypt and having the Jews returned to slavery some 3,500 years after the Exodus from Egypt, the only possible inference here is to the re- enslavement of African Americans. This kind of racial incitement is more than just political exaggeration, this and as we have witnessed during the debate between Biden and Ryan, are examples of just how desperate the Democrat Party is; scaring voters into backing the Obama’s re-election. Biden’s uncivil and downright nasty behavior during the debate shows that in this election, there is literally nothing to which the Obama campaign would not stoop to, all this of course to hide the fact that the empty chair has nothing to show for after four wasted years of the Obama Presidency.

Four years ago, the Obama presidency was hailed as the beginning of a Democratic and Liberal renaissance. Despite the almost blind obedience on the part of Liberals to the Obama agenda, it is the failure of Obama’s so-called successes that have cast a dark shadow on his re-election chances. The failure of the stimulus bill to create work for Americans, the failure to convince the American public on its health care bill, the failure to create economic growth, are all part of Obama’s signature “accomplishments” that have failed across the board having the same weakness in common. The persona behind these initiatives has been unable or as we saw in the debate last week unwilling to fight for what he believes in, to defend without doubt, and to stand up for what you believe in and not cave in. These repetitive personality and behavior traits of avoidance and flight on the part of Obama have made his Presidency a cluster of empty rhetorical gestures, lacking conviction or true intention.

For many of Obama’s supporters, they keep wanting Obama to be who he was in 2008. But that’s not who he is anymore; he never was. The empty chair has spoken, and he has nothing to say. Lets move on.

The writer, a 25-year veteran of the I.D.F., served as a field mental health officer and Commander of the Central Psychiatric Military Clinic for Reserve Soldiers at Tel-Hashomer. Since retiring from active duty, he provides consultancy services to NGO’s implementing Psycho trauma and Psychoeducation programs to communities in the North and South of Israel and is a strategic advisor to the Director of the Shomron Liaison Office. Contact: medconf@netvision.net.il