Ryan, Biden trade barbs on Iran in US VP debate 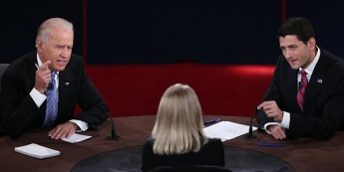 The Iranian nuclear issue featured prominently in the US vice presidential debate Thursday, with Vice President Joe Biden and Republican challenger Paul Ryan trading barbs over the administration’s handling of the threats posed by the Islamic Republic.

Republican Mitt Romney’s climb in polls since US President Barack Obama’s poor showing in their first debate last week has intensified expectations for the vice presidential showdown with less than four weeks before the November 6 election.

Ryan added his view that the Iranians were heartened by Obama’s mistreatment of Prime Minister Binyamin Netanyahu. The ayatollahs ” They see this administration trying to water down sanctions in Congress for over two years.see the US wanting more space with our ally Israel. They see President Obama in New York City the same day Bibi Netanyahu is and he, instead of meeting with him, goes on a daily talk show… When they see us putting daylight between ourselves and our allies in Israel, that gives them encouragement.”

Biden responded that sanctions imposed by the US and other Western countries have been “the most crippling sanctions in the history of sanctions,” and that Obama’s strategy has led to the international community presenting a united front on Iran. “Imagine had we let the Republican Congress work out the sanctions. You think there’s any possibility the entire world would have joined us, Russia and China, all of our allies?”

The current vice president also downplayed forecasts of an imminent Iranian nuclear weapons capability. “The Israelis and the United States, our military and intelligence communities are absolutely the same exact place in terms of how close the Iranians are to getting a nuclear weapon,” he said. “They are a good ways away.”

Biden also addressed concerns that the United States would not be able to inflict significant damage upon Iran’s nuclear facilities, even if it decided on a military strike. “It is not in my purview to talk about classified information,” he said. “But we feel quite confident we could deal a serious blow to the Iranians.”

Turning to Obama’s policy in the broader Middle East, Ryan said that the US President had failed from Syria to Libya in advancing US interests. “We should have spoken out right away when the green revolution was up and starting; when the mullahs in Iran were attacking their people,” he stated. “We should not have called Bashar Assad a reformer when he was turning his Russian-provided guns against his own people.”

CNN polling following the event showed 48 percent of respondents believed Republican candidate Paul Ryan won the debate, while 46% believed Democrat Joe Biden won. Opinions of undecided voters may have been affected by Biden’s body language, as the vice president smiled and laughed sarcastically at points during the 90-minute debate in an apparent effort to dismiss Ryan comments.

Romney has surged to a slim lead in national polls since he and Obama first went head-to-head last Wednesday. The former Massachusetts governor led Obama by 47 percent to 44 percent in the Reuters/Ipsos daily tracking survey on Thursday.

Reuters contributed to this report