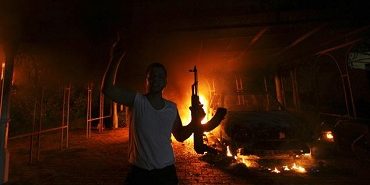 A platoon of US Marines from with the fleet anti-terrorism security team have been sent to Yemen to bolster security at the embassy and are now on the ground in Sanaa, the Pentagon said on Friday.

Elsewhere in the region, protesters against a film denigrating the Prophet Mohammad breached embassy walls in Tunisia and Sudan. Footage on Al Jazeera showed smoke coming from the area of the US Embassy in Tunis and protesters breaching the walls of the mission in Khartoum.

“This is partly a response to events over the past two days at our embassy in Yemen but it’s also in part a precautionary measure,” Pentagon spokesman George Little told reporters.

Protesters in Tunisia breached the wall of the US Embassy in Tunis Friday afternoon, setting fire to trees and breaking windows inside the embassy. At least five protesters were wounded by police gunfire near the embassy. A large fire was burning inside the compound.

In Khartoum, Reuters witnesses reported hearing gunfire from the embassy as protesters climbed over the compound’s walls.

Sudanese demonstrators broke into the German embassy in Khartoum on Friday, raising an Islamic flag and setting the building on fire in a protest against a film that demeaned the Prophet Mohammad, witnesses said.

Police had earlier fired tear gas to try to disperse some 5,000 protesters who had ringed the German embassy and nearby British mission. But a Reuters witness said policemen just stood by when the crowd forced its way into Germany’s mission.

Demonstrators hoisted a black Islamic flag saying in white letters “there is no God but God and Mohammed is his prophet,” They smashed windows, cameras and furniture in the building and then started a fire, witnesses said.

Firefighters arrived to put out the flames.

Employees of Germany’s embassy were safe “for the moment,” Foreign Minister Guido Westerwelle said in Berlin. He also told Khartoum’s envoy to Berlin that Sudan must protect diplomatic missions on its soil, a foreign ministry statement said.

Witnesses reported that the protesters were seen moving in cars and buses toward the US diplomatic mission in the city.

In Lebanon, one demonstrator was killed and two others wounded in clashes in the northern city of Tripoli Friday in protests against the film and the pope’s visit to the country.

A security source said the man was killed as protesters tried to storm a government building. Earlier, a US fast food restaurant was set alight. Twelve members of the security forces were wounded by stones thrown by protesters, the source said.

The protests coincided with Pope Benedict’s arrival in Lebanon for a three-day visit.

Lebanese security forces had earlier opened fire after protesters torched a fast food restaurant in Tripoli and threw rocks at a state building, shouting anti-American slogans and chanting against the pope’s visit to Lebanon.

A Reuters journalist at the scene saw hundreds of protesters dodging gunfire and teargas as they hurled stones at security forces in armoured vehicles. Protesters chanted “We don’t want the pope,” and “No more insults (to Islam)”.

Demonstrators furious at the film clashed with police near the US embassy in Cairo on Friday before a nationwide protest called by the Muslim Brotherhood which propelled Egypt’s Islamist president to power.

Protesters also clashed with police in Yemen, where one person died and 15 were injured on Thursday when the US embassy compound was stormed, and crowds gathered against the California-made film in Malaysia, Bangladesh and Iraq.

It was unclear why the two European embassies were singled out since the film, which has outraged Muslims, was made in the United States, and US diplomatic missions have been attacked by Islamist protesters in a number of Arab countries.

But Sudan has criticised Germany for allowing a protest last month by right-wing activists carrying a caricature of the Prophet Mohammad and for Chancellor Angela Merkel giving an award in 2010 to a Danish cartoonist who depicted the Prophet in 2005, triggering demonstrations across the Islamic world.

Sudanese President Omar Hassan al-Bashir has been under pressure from Islamists who feel the government has given up the religious values of his 1989 Islamist coup.

US President Barack Obama’s administration said it had nothing to do with the crudely made movie, which inflamed Muslims after it was posted with Arabic subtitles on the Internet, and condemned it as “disgusting and reprehensible”.

The film was blamed for an attack on the US consulate in Libya’s eastern city of Benghazi that killed the US ambassador and three other Americans on Tuesday, the anniversary of the Sept. 11, 2001 al-Qaida attacks on the United States.