The reign of imagination 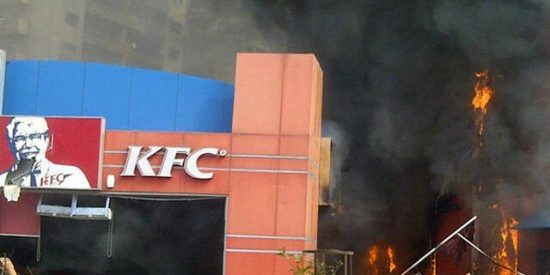 As he suffocated to death at the US Consulate in Benghazi on the 11th anniversary of the September 11 attacks on the US, did US Ambassador Christopher Stevens understand why he and his fellow Americans were being murdered? From what we have learned of this man since he was killed, it is clear that he was extremely courageous. He stole into Benghazi in April 2011 on a cargo ship to serve as chief US liaison officer to the rebel forces fighting Libyan dictator Muammar Gaddafi. He did the business of the US government in makeshift offices and moved from safe house to safe house under what can only be considered dire conditions of combat.

But did he understand the forces he was unleashing? Stevens arrived in Benghazi at an early phase of US involvement in the rebellion against Gaddafi, a former US foe who had been neutered since 2004. But even then it was clear that the rebels with whom he worked included jihadist fighters associated with al-Qaida. Their significance became obvious when just after the regime fell in November 2011, rebel forces foisted the flag of al-Qaida over the courthouse in Benghazi.

Did Stevens understand what this meant? Perhaps he did. But his boss, US Secretary of State Hillary Clinton, certainly didn’t. Following Tuesday’s attack on the US Consulate in Benghazi, Clinton said, “Today, many Americans are asking – indeed, I asked myself – how could this happen? How could this happen in a country we helped liberate, in a city we helped save from destruction? This question reflects just how complicated and, at times, how confounding the world can be.”

Clinton, the bewildered stewardess of US foreign policy, then proclaimed with utter certainty that there is nothing to be concerned about. “We must be clear-eyed, even in our grief. This was an attack by a small and savage group – not the people or government of Libya,” she said.

Of course, what she failed to mention was that after the rebels felled Gaddafi’s regime – with US support – they began imposing Islamic law over large swathes of the country.

Clinton was not the only senior US official who didn’t understand why Stevens and three other Americans were murdered or why the US Consulate in Benghazi was reduced to a smoldering ruin.

Gen. Martin Dempsey, the chairman of the Joint Chiefs of Staff, thinks that the party responsible for the Muslim violence against the US on the anniversary of September 11 is a kook in Florida who enjoys saying nasty things about Islam.

The day after the murderous assault on the US Consulate in Benghazi, and in the face of an ongoing mob assault on the US Embassy in Cairo, and on US embassies in Yemen and Tunis, Dempsey called Pastor Terry Jones in Florida and asked him to withdraw his support for a film that depicts Muhammad in a negative fashion.

Dempsey’s spokesman Col. Dave Lapan told Reuters, “In a brief call, Gen. Dempsey expressed his concerns over the nature of the film, the tensions it will inflame and the violence it will cause. He asked Mr. Jones to consider withdrawing his support for the film.”

Dempsey’s belief that a third-rate riff on Muhammad supported by a marginal figure in Florida is the cause of the terrorist attacks on US embassies is not simply shocking. It is devastating.

It means that the senior officer in the US military is of the opinion that the party to blame for the assaults on US government installations overseas was an American pastor. To prevent the recurrence of such incidents, freedom of speech must be constrained.

And Dempsey is not the only senior US military commander who harbors this delusion.

A similar response was voiced by Gen. George Casey, the US Army chief of staff, in the wake of the massacre of US forces at Ft. Hood in November 2009 by Maj. Nidal Malik Hassan. Hassan, who had been in contact with al-Qaida commander Anwar al-Awlaki and described himself as a “soldier of Islam,” was clearly acting out of Islamic jihadist motivations when he shot his fellow soldiers.

And yet, responding to the attack, Casey said that worse than the massacre itself – that is more sacred than the lives of his own soldiers – was the notion that “our diversity” should fall casualty to Hassan’s murderous attack. In his words, “Our diversity not only in our army, but in our country, is a strength. And as horrific as this tragedy was, if our diversity becomes a casualty, I think that’s worse.”

A word about the much mentioned film about Muhammad is in order. The film was apparently released about a year ago. It received little notice until last month when a Salafi television station in Egypt broadcast it.

In light of the response, the purpose of the broadcast was self-evident. The broadcasters screened the film to incite anti-American violence.

Had they not been interested in attacking the US, they would not have screened the film.

They sought a pretext for attacking America. If the film had never been created, they would have found another – equally ridiculous – pretext.

And here we come to the nature of the attacks against America that occurred on the 11th anniversary of the September 11 jihadist attacks.

A cursory consideration of the events that took place – and are still taking place – makes clear that these were not acts of spontaneous rage about an amateur Internet movie. They were premeditated. In Egypt, the mob attack on the embassy followed the screening of the anti-Islam flick on jihadist television. It was led by Muhammad al-Zawahiri – the brother of al-Qaida chief Ayman al-Zawahiri.

The US’s first official response to the assault on its embassy in Cairo came in the form of a Twitter feed from the embassy apologizing to Muslims for the film.

The day before the attacks, al-Qaida released a video of Ayman al-Zawahiri in which he called for his co-religionists to attack the US in retribution for the killing – in June – of his second in command Abu Al Yahya al-Libi by a US drone in Pakistan.

Zawahiri specifically asked for the strongest act of retribution to be carried out in Libya.

As for the attack in Libya, in an online posting the night before he was killed, US Foreign Service information management officer Sean Smith warned of the impending strike. Smith wrote, “Assuming we don’t die tonight. We saw one of our ‘police’ that guard the compound taking pictures.”

The coordinated, premeditated nature of the attack was self-evident. The assailants were armed with rocket-propelled grenades and machine guns. They knew the location of the secret safe house to which the US consular officials fled. They laid ambush to a Marine force sent to rescue the 37 Americans hiding at the safe house. And yet, Clinton and Dempsey either could not fathom why the attack occurred, or blamed an irrelevant pastor in Florida.

Like Dempsey, the US media were swift to focus the blame for the attacks on the film. The New York Times was quick to report – falsely – that the film’s creator was an Israeli Jew. It took an entire day for that bit of misinformation to be dispelled. But the campaign to blame the attacks on the movie creators continued.

By Wednesday afternoon the media shifted the focus of discussion on the still ongoing attacks from the film to an all-out assault on Republican presidential nominee Mitt Romney. Romney became the target of media attention for his temerity in attacking as “disgraceful” the administration’s initial apologetic response to the attack on the embassies.

Following the September 11 attacks, the US Congress formed the bipartisan 9/11 Commission and charged it with determining the causes of the assault and recommending a course of action for the government to follow to prevent such attacks from happening again. It took the commission members nearly three years to finish their report. In the end, they claimed that the chief failure enabling the attacks was “one of imagination.”

Unfortunately for the US, the commissioners had things backwards. It wasn’t that imagination failed America before September 11. It was that imagination reigned in America. And it still does.

It’s just that the land of make-believe occupied by the US foreign policy elite has shifted.

Until September 11, 2001, the US foreign policy elite was of the opinion that the chief threat to US national security was the fact that the US was a “hyperpower.”

Those forces, of course are anything but marginal.

The Islamic ideology of jihad is the predominant ideology in the Muslim world today.

The rallying cry of al-Qaida – the shehada – is the cry of Muslim faith. Jihadist Islam is the predominant form of Islam worshiped in mosques throughout the world. And the ideology of jihad is an ideology of war against the non-Islamic world led by the US.

Then-president George W. Bush and his administration imagined a world where the actual enemies of the US were marginal forces in Islam. They then determined – based on nothing – that the masses of the Muslim world from Gaza to Iraq to Afghanistan and beyond were simply Jeffersonian democrats living under the jackboot.

If freed from tyranny, they would become liberal democrats nearly indistinguishable from regular Americans.

Hence, Turkish Prime Minister Recip Erdogan is Obama’s closest confidante in the Middle East despite his transformation of Turkey from a pro- Western secular republic into a pro-Iranian Islamic republic in which secularists are jailed without trial for years on end.

Hence Israel – the first target of jihadist Islam’s bid for global supremacy – is a strategic burden rather than an ally to the US.

Hence the US abandoned its most stalwart ally in the Arab world, Egyptian president Hosni Mubarak, and supported the rise of the Muslim Brotherhood to power in the most strategically vital state in the Arab world.

Hence it supported a Libyan rebel force penetrated by al-Qaida.

Hence it is setting the stage for the reinstitution of the Taliban regime in Afghanistan.

It is impossible to know the thoughts that crossed Stevens’ mind as he lay dying in Benghazi. But what is clear enough is that as long as imagination reigns supreme, freedom will be imperiled.