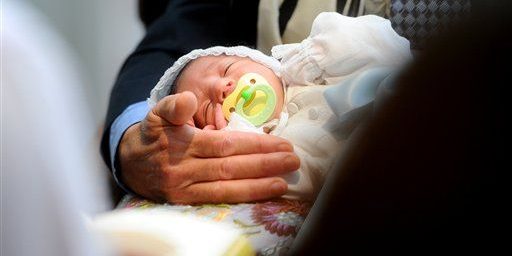 Why do countries with long histories of anti-Semitism and other forms of bigotry seem to care more about the so-called rights of young children not to be circumcised than do other countries in the world with far better histories of concern for human rights? The same rhetorical question can be asked of countries, such as Norway, that care so much about the rights of animals not to be slaughtered according to Jewish ritual. These questions are entirely rhetorical because every thinking person knows the answer. It’s not because Germans or Norwegians are better people and care more about children and animals than do Americans. It is because they care less about Jews. Or more precisely they care a lot about Jews. They just don’t like them very much and don’t care if they are forced to leave the country because they cannot practice their religion there.

So let no one praise a nation that murdered a million Jewish babies and children for shedding crocodile tears over the plight of the poor little baby boy who, following a many thousand year old tradition, is circumcised 8 days after birth. Every good person should condemn Germany for what really lies at the heart of efforts to ban circumcision—old-fashioned anti-Semitism, a term coined by Germans for Germans and against Jews.

History is not irrelevant in assessing current policies. The history of Germany (and Norway) in prohibiting Jews from practicing their traditional rituals goes back to a time when overt anti-Semitism was not only acceptable, it was de rigeur. Today, new words replace discredited old ones. Anti-Zionism instead of anti-Semitism. The welfare of children instead of the banning of religious rituals. But it’s all the same. Anyone who falls for the new pseudo-scientific nonsense about the evils of circumcision or ritual slaughter is as naïve or bigoted as those who fell for the old pseudo-scientific racial claims of Nazism.

Indeed, there is an ugly whiff of “racial superiority” in the implicit assumption underlying these bigoted laws: Namely, that Germans and Norwegians are somehow morally (if not racially) superior to other countries that permit such “barbaric” practices.

How then should reasonable people respond to these unreasonable efforts to make it difficult to practice traditional Judaism? Some have called for a legal response. Perhaps. But fighting these bigoted practices in court plays into the hands of those who are proposing it. In Nazi Germany, respected jurists were able to use the law to justify the most primitive forms of racism. Indeed Nazism operated through the Nuremberg laws and other such anti-Semitic legal enactments, which were declared entirely lawful by the German courts. Efforts to use the law against these manifestations of racism backfired, by legitimating the Nazis’ legalistic undertakings. So let those who seek to challenge these laws do so but not without understanding the downside of such action.

Some may suggest that the alleged science purporting to support these bans be challenged on the basis of scientific truth. Perhaps. But that too may play into the hands of those who would argue that even acknowledging a possible scientific basis for these bigoted proposals lends some legitimacy to them. “Science” too was used to support Nazi racial studies. Should German scientists now conduct “twin studies” on circumcised and uncircumcised siblings? Why is Germany not willing to accept the conclusion reached by the American Academy of Pediatrics following a five year review of the best research, that “the health benefits” of circumcision – including reduction of HIV and papillomavirus transmission – “outweigh the risks?”

The best response is to shame the Germans into rejecting this new form of left-wing anti-Semitism, by showing them how similar it is to the Nazism they now claim to abhor. This approach will not work in Norway, because Norwegians have forgotten their history and still believe they were victims of Nazism rather than collaborators. Norway’s anti-Semitic laws preventing kosher slaughter of animals date back to the pre-Nazi period and have remained in force since that time. Norway seems to have no shame nor is it capable of being shamed. Many Germans, on the other hand, seem willing to remember the past—at least up to a point. They must confront that past and look into the historical mirror before they once again go down the road of treating their Jewish citizens as second class or worse.

Let other countries with cleaner hands take the lead in conducting real scientific research and in seeking to protect the rights of children and animals. The dirty hands and filthy past of Germany forever disqualifies that country from leading the effort to ban Jewish rituals. For shame!

This article was published in German by the Juedische-Allgemeine