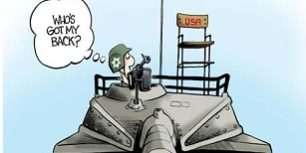 This is an exceptionally dangerous time for Israel. Iran is driving toward a nuclear bomb, and has pledged to wipe Israel off the map. The Muslim Brotherhood has taken power in Egypt. The new president, Mohamed Morsi, cannot bring himself to utter the word “Israel.” The Egyptian-Israeli peace treaty, signed in 1979, is in jeopardy.

Israel has always lived in a dangerous neighborhood. This year, however, the danger has been heightened. Israel needs all the goodwill it can get, especially from the United States, its main ally, and virtually its only meaningful one.

It is an odd time, then, for the Democratic party to be playing games on the question of Israel’s capital. The Israelis consider Jerusalem their capital, indivisible. The city was once divided, making Israel more vulnerable to war. The city was once closed, too, in part. Under Israeli control, everything is different, and better.

In no conceivable, reasonable “final-status agreement” between Israelis and Palestinians is Jerusalem not the capital of Israel. Yet American officials sometimes have trouble acknowledging this. In late July, a reporter asked Jay Carney, the presidential spokesman, a simple question: In the administration’s view, what is the Israeli capital? Jerusalem or Tel Aviv? Carney could not give an answer.

Several weeks later, this ambiguity was reflected in the Democratic-party platform. In 2008, the Democrats’ platform read, forthrightly, “Jerusalem is and will remain the capital of Israel.” But that language disappeared from the 2012 platform. The Republicans made political hay, as you would expect. But there was very serious “hay” in question too.

Nathan Diament, of the Orthodox Union, an American umbrella group, put the matter well: “At a time when Arab leaders persistently assert falsehoods about Jerusalem’s history, and deny the ancient Jewish connection to our holy city, the decision of national leaders of the Democratic Party to go silent on this issue is extremely disappointing. Facts are facts; Jerusalem is Israel’s capital, and America’s national leaders do no service to the people of the Mideast or the world by refusing to acknowledge these crucial facts.”

Yesterday, feeling heat, the Democrats put Jerusalem back into their platform.

Meanwhile, a little side drama played out, starring Debbie Wasserman Schultz. She is the Florida congresswoman who doubles as “chair,” as any Democrat would say, of the Democratic National Committee. She was taking umbrage at Republican attacks on Democrats, where Israel is concerned. Philip Klein of the Washington Examiner reported her as saying, “We know, and I’ve heard no less than Ambassador Michael Oren say this, that what the Republicans are doing is dangerous for Israel.”

Oren is Israel’s ambassador to the United States. After the Examiner’s report appeared, he issued an extraordinarily strong statement: “I categorically deny that I ever characterized Republican policies as harmful to Israel. Bipartisan support is a paramount national interest for Israel, and we have great friends on both sides of the aisle.” Confronted by Fox News with Oren’s statement, Wasserman Schultz said she had been misquoted, and “deliberately” so. “Unfortunately, that comment” — meaning the one attributed to her — “was reported by a conservative newspaper. It’s not surprising they would deliberately misquote me.”

Unfortunately for Wasserman Schultz, Klein had a tape.

The Democrats have an Israel problem, quite naturally: The Left turned on Israel some time ago, and the Left plays a big role in the Democratic party. President Obama’s understanding of the Middle East is more Edward Said than Bernard Lewis, more Rashid Khalidi than Elliott Abrams.

What of the Republicans? Their platform says, “We support Israel’s right to exist as a Jewish state with secure, defensible borders; and we envision two democratic states — Israel with Jerusalem as its capital and Palestine — living in peace and security. For that to happen, the Palestinian people must support leaders who reject terror, embrace the institutions and ethos of democracy, and respect the rule of law.”

That strikes us as sensible. Will Jewish voters reward the Republicans for their warm, understanding, and staunch support of Israel? The GOP should not wait up nights. A Democratic president could mandate the eating of pork and still get a healthy majority of Jewish votes. If you seek an answer to this puzzle, consult Norman Podhoretz’s 2009 book, Why Are Jews Liberal?

But the fate of Israel and the Middle East matters more than the political consequences. The Republicans, as represented by their presidential ticket, their congressional leaders, and their platform, have the right position on Israel. May they prevail for this and a thousand other reasons.