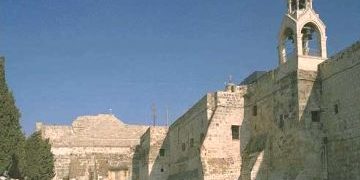 The Church of the Nativity in Bethlehem on Friday became the first World Heritage Site to be listed under the name of Palestine.

Its approval, by a 13 to 6 vote with two abstentions, marks the second victory in less than a year for the Palestinian Authority’s pursuit of unilateral statehood at the UN Educational, Scientific and Cultural Organization.

The vote, which was held by a secret ballot, gives an emotion boost to the Palestinian drive to eventually be recognized unilaterally as a member state of the United Nations.

Resounding applause greeted the announcement of the vote by the World Heritage Committee at its 36th meeting at its 36th session held this week and next in St. Petersburg Russia.

The Palestinian Authority’s Foreign Minister Riad Malki who was in St. Petersburg for the vote thanked the committee for helping the Palestinians obtain their cultural right to self-determination.

Already in October UNESCO agreed to accept Palestine as its 195th member state, even though it is not a member of the overall United Nations. It does, however, now have state rights in all UNESCO related bodies, such as the World Heritage Center.

For technical reasons relating to the signing of the convention, the PA must the cut-off to submit the church for registration as a World Heritage site, and therefor requested that it be considered under an emergency procedure. It said that the church needed urgent repairs and that it was additionally in danger from Israel’s “occupation” of the area.

The World Heritage’s technical advisory body, as well it’s the committee’s secretariat both advised the committee prior to its Friday meeting that the application did not met the necessary criteria to be listed through the emergency procedure. But 13 of the 21 member states on the committee disregarded that advice.

Israel’s ambassador to UNESCO, Nimrod Barkan said that it was a mistake for the committee to ignore the technical advice of its own advisers.

There was no link he said between the water damage to the church roof and its placement on the list through an emergency procedure.

He noted that nothing prevented the Palestinian Authority from fixing the roof.

Israel has in the past said that it believes that the church, known as Jesus’s birthplace, is worthy of inscription as a World Heritage Site, but that it opposes the Palestinian use of the mechanism to advance a political agenda of unilateral statehood.

Malki, however, said that UNESCO has an important role to play in helping protect Palestinian land, which is the “cradle of civilization.”

He said that the Church as well as other West Bank sites were threatened by Israel’s “occupation,” the barrier and settlers.

“This gives hope and confidence to our people on the inevitable victory of our just cause,” said Palestinian Authority Prime Minister Salam Fayyad in a statement following the decision.

“It increases their determination to continue efforts at deepening readiness for the establishment of an independent State of Palestine, with its capital in East Jerusalem within the 1967 borders,” Fayyad said.

Meanwhile, Gideon Koren, Israel’s Vice President of the International Council on Monuments and Sites slammed the decision as “irresponsible.” The US Ambassador to UNESCO David Killion also criticized the move, saying he was “profoundly disappointed by the decision.”

Oddly, the committee’s next move was to approve a bid by Israel to inscribe a series of adjacent caves in the Mount Carmel region to the World Heritage List for their fossilization of human evolution.

Reuters contributed to this report