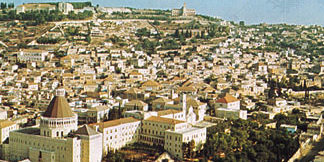 Nazareth Elite, a sleepy Jewish town in Galilee adjacent to the Israeli Arab city of Nazareth, found itself at the center of controversy over alleged “missionary activity.”

Residents woke up one morning to find the town covered with posters, headlined: “Love Has Returned to Our Family,” “God Corrects All of My Mistakes” and “Teens Need God.” The posters included a toll free number to call for a free booklet, including testimonies of those who had been helped by God. The posters were in Russian, targeting the town’s large population of immigrants from the former Soviet Union.

Nazareth Elite Mayor Shimon Gabso immediately had the posters removed on grounds that encouraging Jews to convert to Christianity is illegal. “This is clearly a case of missionary activity,” Gabso said. “It is offensive to the Jewish population of Nazareth , which is a Jewish Israeli town. We don’t allow proselytizing.”

A Messianic Jew named Alex, who initiated the campaign, said that if anyone is on the wrong side of the law, it’s the mayor. “What Gabso did is actually illegal,” he said. “We live in a democratic society and we have freedom of speech and of religion.”

Alex said the poster campaign cannot be described as proselytizing because Christians are not even involved. “We believe in the God of Abraham, Isaac and Jacob,” he said. “We have a right to express and share our faith.”

Ultra-Orthodox residents in the town were outraged. “They are snatching Jewish souls,” said one of them. “What the Nazis failed to accomplish during the Holocaust, the missionaries are trying to achieve now.” Ironically, ultra-Orthodox Jews routinely post their beliefs in similar posters. As for secular residents, many said it’s much ado about nothing.

“If it helps people, why not?” one person told Israel Today.