From out of Zion 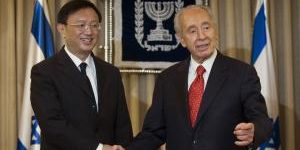 What have the United States, China and Israel in common? You may be surprised at the answer.

But now for the answer:

If you look at the technology heavy NASDAQ you will see that the country with the most companies listed is the USA with 2,393. Next is China with 138. Third is Israel with 57. But what is even more amazing is that coming in a distant fourth is Great Britain with eight companies listed, next Japan with a mere three.

So how is it that the Jewish state with only 7 million people has the third largest number of companies trading in New York? Perhaps the answer lies in the old aphorism: “Necessity is the mother of all inventions.”

The Jewish pioneers of the late 19th and early 20th centuries faced daunting challenges. The land, under successive alien conquerors, lay barren and neglected. The malarial infested swamps had to be drained and the sandy wastes had to be greened again. That necessity was accomplished through blood, sweat and tears and now Israel is the only country with a net annual gain in its number of trees.

The Israeli pioneers of today are creating incredible technological innovations that not only serve Israel but the entire world. Here are just a few of the technological breakthroughs benefiting all the peoples on the planet.

An Israeli company developed a computerized system for ensuring proper administration of medications, thus removing human error from medical treatment. It is estimated that every year in U. S. hospitals 7,000 patients die from treatment errors.

Researchers in Israel developed a new device that directly helps the heart pump blood, an innovation with the potential to save lives among those with heart failure.

In response to serious water shortages, Israeli engineers and agriculturalists developed a revolutionary drip irrigation system to minimize the amount of water used to grow crops.

The cell phone was developed in Israel by Motorola, which has its largest development center in Israel.

Most of the Windows NT operating system was developed by Microsoft-Israel.

The Pentium MMX Chip technology was designed in Israel at Intel and new advanced micro-processors continue development at Intel-Israel.

Both Microsoft and Cisco built their only R&D facilities outside the US in Israel. Steve Ballmer, CEO of Microsoft Corp recently stated that, “When you do the math, Microsoft is almost as much an Israeli company as it is a U.S. company.”

The AOL Instant Messenger was developed in 1996 by four young Israelis.

A new acne treatment developed in Israel, the ClearLight device, produces a high-intensity, ultraviolet-light-free, narrow-band blue light that causes acne bacteria to self-destruct — all without damaging surrounding skin or tissue.

Warren Buffet invested more than $4 billion for Iscar Metal Working, the largest investment he has made outside of the United States.

A technology created by Amit Goffer, who is a wheelchair bound quadriplegic, now enables paraplegics to leave their wheelchairs and walk again — even climb stairs. The technology called ReWalk only helps paraplegics for now and sadly leaves Amit unable to benefit but he says that, “…when I see the impact of the device on a person, it gives me real pleasure.”

That is the spirit that one finds throughout the Jewish state. The ancient Jewish belief of Tikkun Olam — To Repair the World — manifests itself in the wondrous technological innovations created in modern Israel and benefitting the entire globe.

That is why Israel was also the first to send medical relief teams to Haiti and Japan and why the Israeli charity, “Save a Child’s Life” brings thousands of ill children from around the world to Israeli hospitals where they are cured free of charge — irrespective of their race or religion and often from countries hostile to Israel.

This spirit also comes from the love of education and learning. For instance, Rabbi Lord Jonathan Sacks, Chief Rabbi of the United Kingdom, has said that:

“No people put education so much at the top of their priorities. No people survived so many adversaries and came out not merely surviving but renewed in strength.”

You see that strength everywhere you go in Israel and in the institutes of higher learning, many of them built prior to the rebirth of the ancestral Jewish and biblical state.

It is from institutions such as the Technion, the Weizmann Institute, the Albert Einstein Institute, the Volcani Institute, and the universities that a new generation of technicians, scientists, agriculturalists and doctors will emerge.

And here are just a few more Israeli inventions and products:

Answers.Com; Online language translation; GPS Systems; Fuel from algae; Robotic lawnmowers; Ultrasound device to melt tumors; Treatment for Multiple Sclerosis; Emergency bandage that saved the life of Congresswoman Gabrielle Gifford’s life. And made in Israel for the benefit of all mankind.

Who knows what new marvels they will create to help “repair the world” even as they are forced to defend themselves against relentless genocidal violence from the Arab and Muslim world.