Coughlin – Israel mustn't forget Iran is committed to its destruction 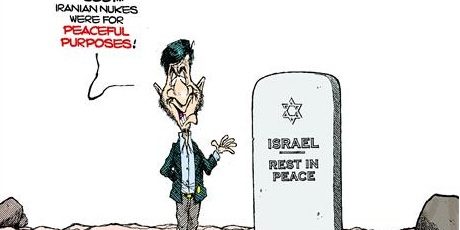 BY CON COUGHLIN, THE TELEGRAPH—

One of the great strengths of the Israeli state, which sets it apart from all its neighbours in the Middle East, is its vibrant democracy, which is far more likely to hold its politicians to account than outside critics who have no idea about the complexities of the country’s internal debate.

The recent criticism of Israeli Prime Minister Bibi Netanyahu’s government by Yuval Diskin, the country’s former head of Shin Bet – Israel’s equivalent of MI5 – over Iran’s nuclear programme is a case in point. At a public meeting last week Mr Diskin launched a bitter attack against the competence of Mr Netanyahu and Ehud Barak, his defence minister, claiming that they are “not fit to hold the steering wheel of power” because they are deliberately misleading the Israeli public over the seriousness of the threat Iran poses to national security, and are making their decisions “based on messianic feelings.”

Mr Diskin’s comments have inevitably been seized upon by Guardinistas such as Mehdi Hassan and other anti-Israeli, left-wing agitators to show that Israel’s concerns over Iran’s nuclear programme are completely unfounded. But in pressing their arguments they are deliberately glossing over important political nuances concerning Israel’s internal debate on the issue.

To start with Mr Diskin is a frustrated man because Mr Netanyahu who was displeased with his performance as Shin Bet chief, and declined to give him his wish to become head of Mossad, Israel’s overseas intelligence agency.

Secondly, as head of Israel’s internal security, Mr Diskin would not have been given access to the latest intelligence on Iran’s nuclear plans, which is handled by Mossad, not Shin Bet. And thirdly, and most importantly, its what the Iranians say about their ambitions for Israel, rather than statements made by Israeli politicians, that really counts.

And on that front the Iranian leadership has been clear and consistent since the current regime came to power during the Islamic revolution more than thirty years ago – Iran seeks the complete destruction of the Israeli state- with or without nuclear weapons. If Mr Diskin cannot grasp that modern-day Iran poses an existential threat to the survival of the Jewish state, then it is little wonder that Mr Netanyahu passed on the chance to make him head of the Iran brief.