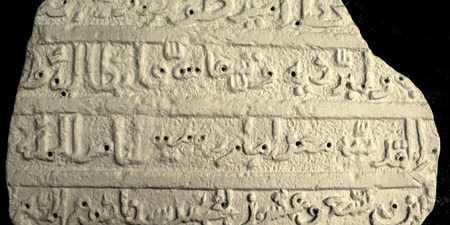 Archaeologists and researchers from Hebrew University have deciphered an inscription bearing the name of Frederick II written in Arabic, declaring him king of Jerusalem, right before he peacefully conquered the city through a treaty rather than a battle.

The discovery is unique because it is the only Crusader inscription in the Arabic language found in the Middle East. Frederick II was the Holy Roman Emperor. The inscription reads: “Frederick II, 1229 of the Incarnation of our Lord Jesus the Messiah.” Professor Moshe Sharon and Ami Shrager of Hebrew University deciphered the inscription.

Researchers did not expect that a Christian king would have written his title in Arabic, the language of the Muslims who were the main combatants of the crusaders at the time. The Crusades, which stretched from 1095 to 1291, were religious wars designed to restore Christianity to the holy places in and near Jerusalem.

Frederick II led the Sixth Crusade – and won Jerusalem through diplomacy, not war.

“Frederick II led the Sixth Crusade of 1228 to 1229 and succeeded, without resorting to arms, in achieving major territorial gains for the Crusader kingdom,” Sharon said. “His most important feat was the handing over of Jerusalem to the Crusaders by the Egyptian sultan al-Malik al-Kamil as a result of an armistice agreement the two rulers signed in 1229.”

Before signing the agreement, Frederick fortified the castle of Jaffa, and apparently left in its walls two inscriptions, one in Latin and the other in Arabic. The small bit of the Latin inscription that remains was previously attributed to Frederick II, Sharon said.

Frederick had a colorful reign in Jerusalem.  Sharon said he opened a zoo and a university plus had a harem that included a Muslim woman.

“It’s not so easy to read Arabic inscriptions, and particularly this one, which was written in an unusual script, and it is on stone and it is 800 years old,” Sharon told LiveScience. “It was written by an artist and this artist decided to create a special script for this royal inscription and it took us a very long time until we were able to find out that, in fact, we were reading a Christian inscription.”

Apparently, Frederick II, despite having been excommunicated by Pope Gregory IX, crowned himself king of Jerusalem in the Church of the Holy Sepulcher. He knew Arabic and maintained a close relationship with the Egyptian royal family.

Sharon said that it was unheard of to find a Christian ruler in Jerusalem who knew Arabic, was interested in Islam and had Muslim scientists and ambassadors in his court.

Nicole Jansezian writes for Travelujah, the leading Christian social network focused on connecting Christians to the Holy Land. People can learn, plan and share their Holy Land tour and travel experiences on Travelujah.