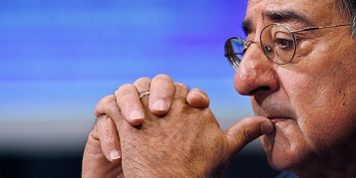 pointed to a U.S. analysis that a strike on Iran would set back its nuclear program, which Iran says is only for peaceful purposes, by one or two years at most. It would also have implications for U.S. forces in the region.

He added that “thirdly, there are going to be economic consequences to that, that could impact not just on our economy but the world economy.”

What to do, then, if a military strike would be both pointless and harmful?

“The United States feels strongly,” Panetta says, “that the way to deal with is to work with our allies, to work with the international community to develop the sanctions and the diplomatic efforts that would further isolate Iran.”

Barak, for his part, doesn’t seem reassured by that. He said it would “probably” take no more than “three-quarters” of a year before

no one can do anything practically about because the Iranians are gradually, deliberately entering into what I call a zone of immunity, by widening the redundancy of their plan, making it spread over many more sites with many more hidden elements.

Barak also warned that “a nuclear Iran would have deep repercussions for the Middle East, prompting countries like Saudi Arabia, Turkey and Egypt to ‘turn nuclear’ and starting a countdown to putting nuclear materials in the hands of terrorists.”

Another who’s not impressed by the Obama administration’s Iran policy, which Panetta’s words can be assumed to reflect, is Illinois Republican Senator Mark Kirk. As he told FoxNews: “They are not taking any real action against the Central Bank of Iran or other parts of the nuclear program…and then telling everyone else that they shouldn’t do anything either.”

Kirk, who is sponsoring legislation to sanction Iran’s Central Bank, says the administration is

afraid of any instability and oil markets, and therefore wants to take no decisive action. They’ll give some pretty good speeches against Iran, but they will not take decisive economic action. That may be because they don’t want disruption in Western economies, worried about prospects for the campaign.

Certainly there’s nothing in Panetta’s words to cast doubt on that analysis. His warning to Barak amounts to saying: the West is militarily helpless before a threat like Iran’s nuclear program; the tooth fairy will take care of it.

Particularly inane is the rationale that attacking Iran would only set it back one or two years, which amounts to a new military doctrine of never attacking an opponent if he has a chance to recover from it. As noted by Jim Lacey, professor of strategic studies at the Marine Corps War College:

The most commonly used excuse for non-action…is that an American military strike would only cause the Iranians to redouble their efforts. Really? In any case, is there some rule against our blowing up their “redoubled” program a year or two from now? Is there not a point where even the Iranians will tire of seeing hundred-billion-dollar investments repeatedly turned into rubbish?

But the real insult to one’s intelligence is Panetta’s assertion that “work with…the international community…to develop the sanctions and the diplomatic efforts” is the solution—as if that hadn’t already been tried ad nauseam, with the “results” being the November 8 IAEA report clarifying that Iran is fast approaching its nuclear goal.

Here even Kirk’s belief in sanctioning Iran’s Central Bank is overblown. True, the U.S. administration is now reportedly considering sanctions on Iran’s petrochemical industry while making no mention of its far more significant Central Bank. But even if the administration aimed for sanctions on that body, it’s hardly likely it could get its allies—let alone Russia and China—to cooperate, and certainly not within the timeframe clarified by Barak.

As Benjamin Weinthal notes: “When it comes to sanctioning Iran, Germany has long been the weakest link in the chain. Yet France, Italy and the United Kingdom also refuse to sanction Iran’s Islamic Revolutionary Guard Corps​ or its central bank.” That’s so even though “both entities are deeply immersed in Iran’s nuclear program and finance its terrorist proxies….”

But what to do when, “in 2010, as the US moved to tighten economic sanctions on Iran, European capitals merely paid lip service, while their bilateral trade with Iran flourished to over 25 billion Euros a year.” That’s a lot of Euros—especially for a continent on the brink of economic collapse.

Israeli hopes, then, that the latest IAEA report would prompt greater seriousness are already fading. The analogies with the 1930s are striking: the West’s ongoing pathological inability to cope with the danger; Jews as the immediate target, trying vainly to convince others that they’re but the canary in the coalmine. The difference, though, is that this time the Jews have a state and the ability to act.