A Goliath in the Church 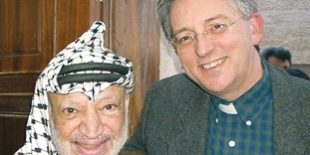 “The Word of the Lord came to Jeremiah: ‘Have you not observed that these people are saying, “The Lord has rejected the two clans that He chose”? Thus they have despised My people so that they are no longer a nation in their sight’” (Jeremiah 33:23-24).

One man who has consistently despised the nation of Israel is Anglican canon Naim Stifan Ateek, an Arab clergyman originally from Beit She’an who fully identifies with Palestinian nationalism.

In his Easter message in 2001, Ateek made the following statement: “Here in Palestine Jesus is again walking the Via Dolorosa. Jesus is the powerless Palestinian humiliated at a checkpoint, the woman trying to get through to the hospital for treatment, the young man whose dignity is trampled… In this season of Lent, it seems to many of us that Jesus is on the cross again with thousands of crucified Palestinians around him. It only takes people of insight to see the hundreds of thousands of crosses throughout the land, Palestinian men, women, and children being crucified. Palestine has become one huge Golgotha. The Israeli government crucifixion system is operating daily. Palestine has become the place of the skull.”

Ateek’s sermon should have raised concerns among his own churchmen.

But his troubling rhetoric has continued unabated, emboldening even Evangelicals to stand against Israel and its Christian allies.

In 1994 Ateek founded a Palestinian organization called “Sabeel.” According to its purpose statement, Sabeel is “an ecumenical grassroots liberation theology movement among Palestinian Christians.”

It is much more than that. Sabeel fronts what can only be described as a political propagandist movement in the Church, which has covered itself with a veneer of biblical respectability by drawing support from Western theologians, such as John Stott and N.T. Wright.

I have labeled this movement “Christian Palestinianism” because it represents the antithesis of biblical Christian Zionism and therefore a distortion of the Christian faith and God’s Word. Among its most notable leaders in the West are Stephen Sizer, Gary Burge, Donald Wagner, Colin Chapman, Tony Campolo, Hank Hanegraaff, and Brian McLaren.

Christian Palestinianism is a one-issue coalition of strange bedfellows whose protagonists not only contort Scripture to suit their anti-Israel agenda but also defame the character of the One who “remembers His covenant forever, the Word that He commanded for a thousand generations, the covenant He made with Abraham” (Psalms 105:8-9).

Their message is based on the teaching that has plagued the Church for centuries – namely, that God has replaced the nation of Israel with the Church.

According to Elias Chacour, the Vatican-approved Melkite Greek Catholic Archbishop of Israel: “We have been taught for centuries that the Jews are the chosen people. We do not believe anymore that they are the chosen people of God, since now we have a new understanding of that chosenness.”

In his book Justice and Only Justice (1990), Ateek expounds a “new way” of interpreting the Scriptures which underpins this “new understanding”: “When confronted with a difficult passage in the Bible … one needs to ask such simple questions as: Is the way I am hearing this the way I have come to know God in Christ? Does this fit the picture I have of God that Jesus has revealed to me?… If it does, then that passage is valid and authoritative. If not, then I cannot accept its validity or authority.”

Ateek’s contempt for the authority of Scripture is further evidenced in his latest book, A Palestinian Christian Cry for Reconciliation (2008), in which he calls for Old Testament prophecies of a glorious future for the nation of Israel to be “de-Zionized.”

One example he cites is Isaiah 61:5-6, which speaks of a time when Israel “shall eat the riches of the Gentiles.”

According to Ateek, “This exclusivist text is unacceptable today, whether it has to do with God or people or land. It must be de-Zionized as well.”

According to Ateek, “A Palestinian theology of liberation has re-established the balance between Christ’s two natures – his divinity and his humanity.

Palestinian liberation theology focuses on the humanity of Jesus of Nazareth, who was also a Palestinian living under an occupation.”

Ateek’s portrayal of Jesus in this way has become a powerful propaganda weapon in the Christian Palestinianists’ armory. More ominously, it echoes what Palestinian clerics, authors, and political leaders have been saying publicly in recent years in a brazen attempt to claim Jesus as one of their own.

Since the second century of the Christian era, the Church has been infected with the cancerous Replacement theology. By propagating their own Islamicized version of Replacement thinking (now rebranded “Fulfillment theology” by some Evangelical adherents), Muslim scholars have endeared themselves to those within the Church who have cast off the restraint of God’s Word. Blinded by their hatred of Israel, these churchmen are forging an unholy alliance with the Muslim world.

In pursuit of this agenda, Anglican vicar Stephen Sizer of Britain defended Iranian President Mahmoud Ahmadinejad over his Holocaust denial and hostile rhetoric against Israel, during an Islamic Republic News Agency press conference in Tehran in October, 2007.

In May, 2010, Sizer was joined by American Presbyterian ministers Gary Burge and Donald Wagner at a conference sponsored by the World Islamic Call Society.

This new Evangelical vanguard against Israel has also joined hands with some of Israel’s fiercest Jewish antagonists. In November 2010, Sizer posted on his blog a clip from the documentary film American Radical: The Trials of Norman Finkelstein and wrote underneath: “Norman Finkelstein has my deepest admiration for the stand he is taking.”

Finkelstein is one of the most controversial Jewish anti-Zionist activists in the United States; in 2008 he was banned from Israel for 10 years for security reasons.

Ilan Pappé is another controversial Jewish academic now linked with this anti-Israel brigade. His book, The Ethnic Cleansing of Palestine (2006) has helped fuel the propaganda fires which Christian Palestinianists have been igniting in the Church.

Exploiting Pappé’s inflammatory language to the full, Sizer wrote in an article: “My research has highlighted how the Palestinian Christian community has suffered isolation, discrimination, and persecution akin to ‘ethnic cleansing,’ and a form of apartheid.”

In 2010, Sizer and Porter Speakman Jr. conducted a tour of seminaries and churches across the United States and the United Kingdom, screening Speakman’s anti-Christian Zionist film With God On Our Side. Last November they showed the film at Stormont – the Belfast home of the Northern Ireland General Assembly.

The private screening was hosted and sponsored by Sinn Fein! Like the Philistine champion Goliath who defied the armies of Israel, Christian Palestinianists are today defying the State of Israel while taunting Christians who stand with the Jewish people.

Their relentless campaign against God’s chosen nation will, like Goliath, eventually fall, for it is not the State of Israel they are ultimately defying, but the Holy One of Israel. •