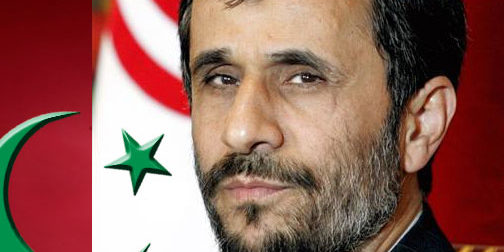 With the world riveted by protests in Syria and the uprising in Libya, everyone seems to have forgotten the most important issue: Iran’s breathless pursuit of nuclear weapons. But the dearth of attention in no way reflects a lessening of the threat, as the ayatollahs march steadily closer to developing an atomic arsenal.

We all know full well what they plan to do with such weapons should they succeed in building them, as Iranian President Mahmoud Ahmadinejad has made abundantly clear.

Indeed, just last week, in two separate appearances, the “Tyrant of Tehran” went out of his way to rail against Israel, labeling it “Satanic” and asserting that the Jewish state is the root of all evil.

Some like to mock the Iranian leader, portraying him as a nut. He most certainly is, but we must still take him at his word.

Ahmadinejad has told us over and over again that he plans to eliminate Israel and destroy the West.

Not content with mere talk, the would-be Hitler of Persia is now busy devising an atomic Auschwitz designed to finish what the Nazis began.

Like it or not, we are all in his crosshairs, and ignore him at our peril. And that is why the time has come for Israel to tackle this threat head-on.

The enormity of the mounting danger was underlined last month by a chilling series of developments, all of which point toward the inescapable conclusion that Iran is intent on obtaining the Bomb.

These included “producing uranium metal… into components relevant to a nuclear device” and “missile re-entry vehicle redesign activities for a new payload assessed as being nuclear in nature.”

In other words, Tehran is constructing nuclear weapons as well as the missiles to deliver them.

Three weeks later, at the end of June, British Foreign Minister William Hague told the House of Commons in London that Iran had conducted covert tests of ballistic missiles, including “missiles capable of delivering a nuclear payload.”

According to British intelligence, Tehran has carried out three such tests since October.

This is in direct violation of UN Security Council resolution 1929. Passed on June 9, 2010, it explicitly stated that “Iran shall not undertake any activity related to ballistic missiles capable of delivering nuclear weapons, including launches using ballistic-missile technology.”

But just as they have done in the past, the ayatollahs blithely ignored the world’s rebuke.

Thus far, four rounds of sanctions against Iran have been imposed, yet Ahmadinejad is closer than ever to his goal. Indeed, British Defense Secretary Liam Fox has suggested that Iran may have a viable nuclear weapon as soon as next year. Others think it may take a bit longer, but the precise timing is largely beside the point.

Can we really risk our future and that of our children by standing idle as weapons are forged with the aim of destroying us?

THE SAD fact is that diplomacy has failed; its only effect has been to give the Iranians more time to achieve their malicious aims.

For more than a decade, Iran hid its nuclear program from the international community. It has interfered with inspections of its nuclear facilities and repeatedly defied demands to cease and desist.

Does anyone really think another UN resolution is going to do the trick? Of course, Ahmadinejad has always denied that his aim is to get his hands on atomic weapons. But at a ceremony in Tehran on June 23, he said in no uncertain terms that, “If we want to make a bomb, we are not afraid of anyone and we are not afraid to announce it; no one can do a damn thing.”

It should be obvious that an atomic Iran would undermine the stability of the entire region, bolster radical anti-Western forces, and raise the possibility of terrorist groups allied to Tehran, such as Hamas and Hezbollah, getting their hands on the most devastating of weapons.

The bottom line is that Iran can and must be stopped.

Like it or not, the only way to do so is with military force.

If the US lacks the will, then Israel has no choice but to act alone.

Sure, an attack on Iran would be logistically difficult, diplomatically dangerous, and would have some serious consequences. But the alternative is simply too frightening to contemplate. The alarm bells are ringing, and we must heed their call.

Seven decades ago, the Germans murdered six million of our people as the world remained silent. We cannot assume it will act differently if Iran seeks to do the same.

So let’s muster the courage to do what must be done and dismantle the Iranian Auschwitz before it is too late.

Bomb Iran now. There is no other choice.