Much ado about Bibi and Barack 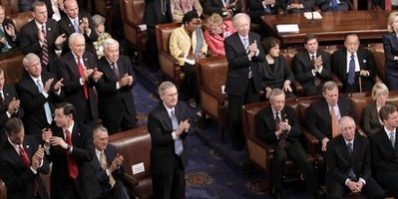 WHEN ALL WAS SAID AND DONE, much more was said than done during Israeli Prime Minister Benjamin Netanyahu’s high-profile visit to Washington. But once all the words were spoken, what was left behind?

For the better part of a week, Netanyahu and President Barack Obama engaged in a fraught pas de deux, beginning with the president’s speech on Middle East policy at the State Department the day before Netanyahu arrived and culminating in the prime minister’s address to a joint session of Congress on Tuesday. It was indisputably a riveting encounter, but there was no consensus on what it meant.

By the time Netanyahu’s visit ended, he was being variously blamed (by Eliot Spitzer in Slate) for having picked “a useless, counterproductive fight with the president” and hailed (by Edward Morrissey in The Week) for having established himself “as the real statesman in the conflict.” No one could deny the rapturous enthusiasm with which Congress received Netanyahu — senators and representatives gave him more than two dozen standing ovations — but did such pro-Israel passion risk “undermining America’s long-term interests in the region” (as Michael A. Cohen charged in Foreign Policy)? Or did it signal the creation of “a significant new political dynamic in the United States” (as former UN Ambassador John Bolton wrote for Fox News)?

But such analyses strain too hard to assign a consequence to Netanyahu’s trip to Washington. The interplay among Obama, Netanyahu, and Congress made for an interesting show, but it changed nothing important on the ground. The US-Israeli relationship was and is strong. The Israeli-Palestinian “peace process” was and is fruitless. Those realities are no different today than they were last month.

For better or for worse, presidential attitudes shape US foreign policy, and it is clear that the current president, unlike his two predecessors, feels little instinctive warmth for Israel. In his address last week to AIPAC, the pro-Israel lobby, Obama described America’s commitment to Israel as “unwavering,” “ironclad,” “unbreakable,” “profound,” and several other synonyms for “strong” — which it is. He also described himself as a friend of Israel, which is not so clear. Between picking fights over housing starts in Jerusalem or insinuating that Israeli policy in Gaza endangers US troops in Iraq and Afghanistan, the president seems at times to go out of his way to telegraph an aloof coolness toward the Jewish state.

That was why Obama’s talk of an Israeli retrenchment to the pre-1967 lines, even with “mutually agreed swaps,” provoked such a strong reaction. It reinforced what many see as Obama’s lack of empathy for Israel’s security predicament, and suggested that he is more interested in getting Israel to change its shape than in getting the Palestinians to change their behavior. Obama later backtracked, and his apologists have been arguing that his words were misconstrued. But the president knew those words would spark a firestorm, and he insisted on saying them anyway. Clearly he intended to intensify the pressure on Israel.

Yet even the president of the United States is limited in the amount of pressure he can put on an ally with which the American people feel such a powerful affinity.

There are many illustrations of American exceptionalism, but surely one of the most striking is the solidarity with Israel that is such an abiding feature of US opinion. That solidarity is deep-rooted and durable; it cuts across age and sex and party line; and it is mirrored in the views of America’s elected officials.

The thunderous reception Prime Minister Netanyahu received on Capitol Hill last week was as heartfelt as anything in American politics can be. It reflected the kinship of common values that links the greatest liberal democracy in the world with one of the smallest — and that has done so since Harry Truman recognized the embattled state of Israel within minutes of its birth 63 years ago this month.

Israel is still embattled, and its enemies hate Americans as much as they hate Jews. That too helps explain the bond that Americans feel for Israel.