How Obama has empowered Netanyahu 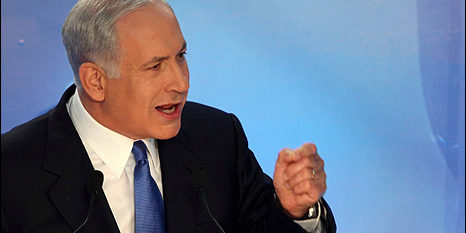 Lawmakers gave Binyamin Netanyahu 59 rounds of applause as the Israeli prime minister addressed a joint meeting of Congress Tuesday. But more revealing was the whisper I heard while watching the speech from the House gallery.

It came as Netanyahu repeated his rejection of the notion, floated by President Obama last week, that peace talks with Palestinians should be based on Israel’s smaller, pre-1967 borders.

“Israel will not return to the indefensible boundaries of 1967,” Netanyahu thundered. “Jerusalem must never again be divided,” he roared.

“Go, Bibi!” the woman next to me said, sotto voce.

It was the voice of Inna Graizel, my daughter’s 21-year-old Israeli au pair, who is spending a year with my family, learning about America.

I, too, am learning. I took Inna to see her prime minister speak this week, first at the American Israel Public Affairs Committee and then before Congress, and I saw through her eyes how badly Obama bungled his Middle East speech. He unwittingly strengthened Israeli hawks such as Netanyahu and made the already remote prospect of peace that much more distant. Of this, Inna herself is evidence: Though she’s a moderate who was suspicious of the uncompromising Netanyahu, the episode turned her into a supporter.

Inna, whose family emigrated from the former Soviet Union when she was an infant, comes from the north of Israel but from the center of its politics. Middle class and non-religious, she went to high school on a kibbutz before she learned how to fire an M-16 and became an army officer. She voted for the centrist Kadima party in the last election because she didn’t share the militant views of Netanyahu’s Likud.

Inna is fiercely patriotic, and when I asked her to assign blame for the conflict, she assigned 80 percent of it to the Palestinians. Twice in her young life, Hezbollah rockets rained on her neighborhood; the last time, she fled to Tel Aviv.

But she also sees her own country’s culpability. She thought the Israeli raid on the Gaza-bound aid flotilla was “stupid,” and she thought Netanyahu’s expansion of settlements was unwise. She describes her country as “arrogant” and has some sympathy for the Palestinians: “We did invade their home. You can’t deny that.”

What distinguishes Inna and other Israelis is their deeply pessimistic outlook. She fully understands that things could get worse in Israel without a peace deal, but she has no expectation that there will be peace in her lifetime. “It’s like an equation too big to be solved,” she said. This sense of hopelessness, confirmed by the recent resignation of the American envoy to the region, George Mitchell, has hardened Inna’s generation. “We are very cynical and we don’t trust anybody,” she said.

Unfortunately, Obama encouraged that cynicism last week, when he offered his now-infamous suggestion that “the borders of Israel and Palestine should be based on the 1967 lines with mutually agreed swaps.”

Obama and his defenders argued that this wasn’t really a new policy, but, as The Washington Post’s Glenn Kessler expertly documented, the statement “represented a major shift.” Later, after the damage had been done, Obama qualified his statement, saying the border should be “different than the one that existed on June 4, 1967.”

Inna was stunned. “Jerusalem, the Golan Heights and the West Bank, the 1967 lines? It’s crazy,” she said. “It’s impossible.” Holding her thumb and forefinger an inch apart, she added, “They’ll be this close to Tel Aviv.” The phrase about “agreed swaps” changed nothing.

To Inna’s ears, Obama had issued an existential threat to Israel, and it put her in an unfamiliar place: in lockstep with Bibi. When he told Obama in the Oval Office that the 1967 lines were “indefensible,” Inna celebrated. “Now, he’s our guy,” she said. “He’s the voice of Israel.”

She’s aware that Netanyahu isn’t about to strike a peace deal. After she listened on Tuesday to Netanyahu’s list of requirements for a Palestinian state — a list one Palestinian official called a “declaration of war” — she knew it was a nonstarter. “I can’t imagine it on a map,” she said.

But that was less important to Inna than Netanyahu’s firm rejection of Obama’s frightening proposal. “It’s a big thing to say ‘no’ to the president of the United States,” she said. If there were an election now, she said, “I would vote for Bibi.”

This is why Obama’s speech was such a blunder. By pushing an Israeli moderate such as Inna into the arms of Netanyahu, Obama has strengthened the hard-liners.