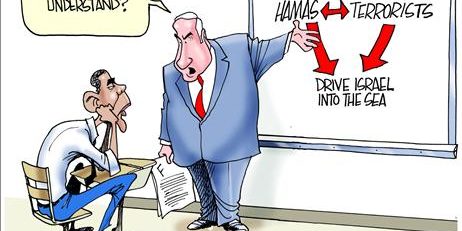 Israeli officials on Sunday had harsh criticism for US President Barack Obama a day after he sided with Arab “peace” demands and strongly suggested that Israel is the obstacle to peace in the region.

In a televised foreign policy speech last Thursday, Obama stated that “the borders of Israel and Palestine should be based on the 1967 lines,” and insisted that “the Palestinian people must have the right to govern themselves and reach their full potential.”

A day later, Obama met with Israeli Prime Minister Benjamin Netanyahu at the White House. During their joint press conference following the meeting, Netanyahu flat-out rejected Obama’s premise that peace must be based on the 1967 borders.

“While Israel is prepared to make generous compromises for peace, it cannot go back to the 1967 lines because these lines are indefensible because they don’t take into account certain changes that have taken place on the ground,” explained Netanyahu.

The Israeli leader warned that basing a future peace deal on the 1967 borders, as the Arabs insist, will result in “a peace based on illusions will eventually crash on the rocks of Middle Eastern reality.”

Writing for the leftist Israeli newspaper Ha’aretz, top political analyst Ari Shavit said that Obama’s speech was good for Israel in that it opposed Palestinian efforts to unilaterally secure independence, slammed Mahmoud Abbas’ unity deal with Hamas, and recognized Israel as the Jewish state, and called on the Palestinians to do the same.

But, Shavit said, Obama erred critically in his insistence on the 1967 borders.

“Without intending any harm, Obama presented Israel with a suicidal proposition: an interim agreement based on the 1967 borders. It’s a proposal that runs along the same lines as the Hamas offer of a hudna – a long-term cease-fire.”

Shavit warned that by setting the 1967 borders as the starting point for final status negotiations, Obama had allowed the Palestinians to make the “right” of millions of so-called “Palestinian refugees” to flood Israel the focal point of continued negotiations.

Israelis from across the political spectrum reject the Palestinian effort to demographically destroy the Jewish state by bringing in those millions of foreign-born Arabs. If the Palestinian “right of return” becomes the primary topic of discussion, there is little to no hope of concluding a peace deal.

“Don’t fall for Obama’s magical oratory. He put a gun to Israel’s head and asked it to commit suicide.”

According to some reports, Netanyahu recognized the danger of Obama’s words, and the two leaders had a tense discussion during their White House meeting.

Netanyahu dismissed reports of increased tension between himself and Obama, insisting that their disagreements on certain details of the peace process are “differences of opinion…among friends.”

But many believe the writing is on the wall, and Obama will soon push Israel into a dangerous peace deal. His clear suggestion that Israel’s repeated stalling, rather than Palestinian peace infractions, is the main reason for a lack of peace today is telling.

“The international community is tired of an endless process that never produces an outcome,” said Obama in his Thursday foreign policy speech. “The dream of a Jewish and democratic state cannot be fulfilled with permanent occupation.”

In his remarks following the White House summit, Obama said the current political changes across the Arab world offers an opportunity for his vision of peace to be realized.

“There is a moment of opportunity that can be seized as a consequence of the Arab Spring,” said Obama.

In an interview last month with Israel Today, Israeli political analyst Yoram Ettinger said the opposite is in fact true. The reality, said Ettiger, is that the “Arab Spring” demonstrates just how fragile the Arab world is, and how foolish it would be to trust Israel’s security to a Palestinian regime that could be swept aside in a moment.

Obama’s reiteration that without a state the Palestinians cannot reach their true potential and must live in humiliation also ignored realities on the ground.

In the upcoming issue of Israel Today, average Palestinians told us that they don’t want an independent state ruled by Abbas and his thugs, and that they already live in peace and prosperity with the Jews around them.