Just what was Obama asking of Israel? 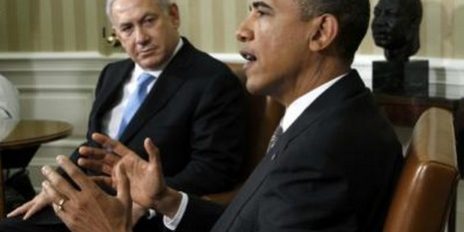 Only 20 percent of President Barack Obama’s Middle East speech on Thursday dealt with Israel-Palestinian issues, and only at the end.

Clearly, this was not the main theme. Obama had to say something on this subject, but never intended for that part to make all the headlines.

I believe the speech was not intended to bash Israel. The fact that it came off that way tells us a lot about Obama and his policies.

Indeed, there were several items no doubt perceived by the White House as gestures that would make Israel happy.

First, his tough line opposing the Palestinian Authority’s efforts to get unilateral recognition of a state from the UN General Assembly: “For the Palestinians, efforts to delegitimize Israel will end in failure. Symbolic actions to isolate Israel at the United Nations in September won’t create an independent state.”

Second, downplaying the linkage idea: “For decades, the conflict between Israelis and Arabs has cast a shadow over the region… Moreover, this conflict has come with a larger cost to the Middle East, as it impedes partnerships that could bring greater security, and prosperity and empowerment to ordinary people.”

A “shadow” that “impedes,” but not the central issue or cause of all the region’s problems.

Third, his acknowledgment that the US cannot make peace and isn’t going to try to impose a settlement or even propose a detailed plan. He’s simply urging the two parties to act.

“What America and the international community can do is to state frankly what everyone knows – a lasting peace will involve two states for two peoples: Israel as a Jewish state and the homeland for the Jewish people, and the state of Palestine as the homeland for the Palestinian people, each state enjoying self-determination, mutual recognition and peace.”

Get it? This isn’t a blueprint for producing a deal within a year, or preparation for pressuring Israel. All the US can do is… say stuff.

Fourth, he takes a tougher line on the Fatah-Hamas agreement, saying it raises “profound and legitimate questions for Israel: How can one negotiate with a party that has shown itself unwilling to recognize your right to exist? And in the weeks and months to come, Palestinian leaders will have to provide a credible answer to that question.”

Fifth, he says a Palestinian state must be “non-militarized,” which has long been an Israeli demand.

Why, then, did he so upset Israel and its supporters? Look at this remarkable sentence: “Yet expectations have gone unmet. Israeli settlement activity continues. Palestinians have walked away from talks.”

I believe this is the first time he’s ever acknowledged that the Palestinians refused to talk, though this has been obvious to all Israelis for two years. But by not mentioning that at his request, Israel imposed an unprecedented building freeze and then, at his demand, added Jerusalem to that freeze, Obama shows that he will not appreciate or reward Israeli concessions.

So while trying to be even-handed, he’s signaling to Israel that it will gain nothing by doing what he asks.

THEN THERE’S Obama’s patronizing attitude – that he knows what Israel needs better than Israelis or Israeli leaders do. He says “permanent occupation” does not benefit Israel. Well, it’s not the best outcome, but there are worse ones – something Obama and his colleagues (and the mass media) never understand.

It’s not enough to keep repeating that the status quo is untenable. One must provide a convincing vision of a better status quo. And in that, Obama, the Europeans and certainly the Palestinians fail totally.

They ignore the problems Israel would face with a real-world two-state “solution” under current conditions: cross-border raids, incitement, new demands, a possible Hamas takeover, or a Palestinian state reneging on its commitments.

At the very moment Egyptians are talking about abrogating their peace treaty, Obama urges Israel to sign another one. Israel made a deal with Lebanon’s government, that country’s president was assassinated, and the deal was broken. Israel withdrew from south Lebanon and was attacked by Hezbollah.

Israel pulled out of the Gaza Strip and was attacked by Hamas. Israel turned over land to the PA, then faced terrorist attacks from the territory.

Yet Obama proposes doing the same thing again. He suggests Israel turn over the rest of the West Bank to the PA in exchange for security guarantees.

He has no interest in how ridiculous this sounds in the context of the Israeli experience.

Now we come to the big controversy: “We believe the borders of Israel and Palestine should be based on the 1967 lines, with mutually agreed swaps, so that secure and recognized borders are established for both states.”

To me, this is no big deal compared to the other problems. Far from demanding that Israel return to the 1967 borders, that sentence really leaves the issue open.

I don’t believe that Obama “hates” Israel. I think he has zero comprehension of Israel, and isn’t interested in learning more. But the big problem is his failure to recognize the threat of revolutionary Islamism, blindness about what’s happening with Turkey’s Islamist regime, and weakness toward America’s enemies. These also injure Israel indirectly, as well as America’s Arab allies, and the Iranian and Turkish people.

So, yes, Obama’s policy is disastrous, but not because he is attacking Israel directly or abandoning the traditional relationship. It’s a catastrophe because his policy hurts all of America’s allies, strengthens revolutionary Islamists, and discards basic US interests in the region.