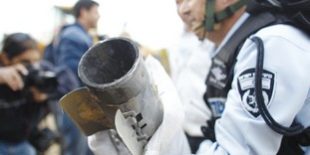 Two barrages of rockets were fired at the Eshkol Regional Council Saturday night, bringing the number of rockets launched into Israel from Gaza to over 50 since Saturday morning, police said.

A rocket caused some damage to homes and struck a main water pipe in a kibbutz in the Shaa’r Hanegev Regional Council, but no injuries were reported.

Meanwhile, Palestinian sources on Saturday night reported that an IAF aircraft fired a missile at a terrorist cell in Gaza City, killing one of the terrorists and wounding four.

According to reports, the targeted cell was part of the military wing of the Popular Resistance Committees.

Haim Yalin, head of the Eshkol Regional Council, which has been pounded by rockets and mortars from Gaza continuously, told The Jerusalem Post on Saturday evening that the situation was the same as it was during the 2009 Operation Cast Lead.

“This has been going on for 3 days now. It’s the same number of rockets as Cast Lead. The feeling is that we are back to that situation all over again. This is an emergency situation,” Yalin said.

“We are in an emergency situation, even though the state has not declared an emergency. We are running around all day to calm down the residents. Everyone here is part of the effort to deal with this,” Yalin said.

The Iron Dome system was able to intercept one of the rockets, bringing the total number of intercepted rockets since Thursday to eight.

Acting Southern police head Lt.-Cmdr. Kobi Cohen held a special evaluation meeting on Saturday due to the escalating security situation. The meeting concluded with a decision to raise the police’s level of alert to three – the level right before the highest. Back up forces, including bomb squad officers and Border Police, have been sent to the south from other police districts. Police will also maintain checkpoints and an increased presence into Sunday.

3 people remain hospitalized at Ashkelon’s Barzilai Medical Center after suffering from shock due to rocket attacks.

Overnight Friday, 15 Grads were fired from Gaza into Israeli territory. The Iron Dome rocket-defense system intercepted five of them in the Beersheba and Ashkelon areas, Israel Radio reported.

Five Israelis were reportedly injured when scrambling to enter bomb shelters as rockets were being fired into their areas.

Three Hamas commanders were killed in an IAF airstrike early morning Saturday on a car in the southern Gaza city of Rafah. Palestinian news agencies reported a fourth Hamas man was killed in an IDF strike late Saturday morning. The IDF said it was looking into the reports.

Palestinian news agency Ma’an reported that other IDF strikes took place overnight in Gaza City, a Hamas training base in the northern Strip and a neighborhood in Khan Younis.

Artillery strikes were reported in the Rafah area along the Strip’s southern border with Egypt.