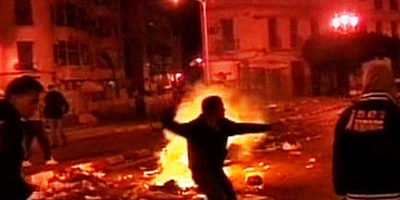 A fundamental change of government in Egypt may lead to a “revolution in Israel’s security doctrine,” a defense official told Ynet Friday night, as protests against President Hosni Mubarak’s rule continued to intensify.

The security official made it clear that Israel’s peace treaty with Egypt constitutes an important strategic asset, “which enables the IDF to focus on other theaters.” The defense source said that the IDF would have to dedicate major resources in order to devote any attention to the Egyptian front as well.

“It is no secret that the IDF focuses on certain theaters and earmarks most resources to them,” the official said. “The Egyptians are only addressed on the margins. We are holding discussions, including updates relevant to recent years, yet without a doubt Egypt is not considered a theater that requires attention.”

Should a revolution indeed take place in Egypt, the rules of play will not necessarily change at once, the source added. “It won’t mean, heaven forbid, that Egypt would immediately turn into an enemy country, yet our attention would most certainly have to shift.”

Defense officials are closely monitoring developments in Israel’s southern neighbor, considered the “heart of the Arab world.” The immediate Israeli concern has to do with possible developments on the Egypt-Gaza border, where Egyptian forces have been working intensely as of late to curb weapons smuggling. According to security officials, the riots currently raging across Egypt may have negative implications on its Gaza border.

Another concern voiced within Israel’s defense establishment has to do with Egypt’s advanced army, which includes thousands of tanks, hundreds of fighter jets, and dozens of vessels.

“This is a Western army in every way and it enjoys US aid,” one security official said. “There is no doubt that should we see an extremist regime over there controlling such army, this will place Israel in a wholly different position.”

“There is no doubt that in the coming days, many eyes have to be monitoring Egypt. Later we’ll make all the calculations as to the implications,” the official said.

The cabinet member, who asked to remain anonymous, characterized recent events as an “earthquake” in the Middle East. His comments were made ahead of Friday’s escalating riots and before Prime Minister Benjamin Netanyahu instructed his ministers to refrain from addressing the situation in Egypt.