The Islamic Tide is Cresting 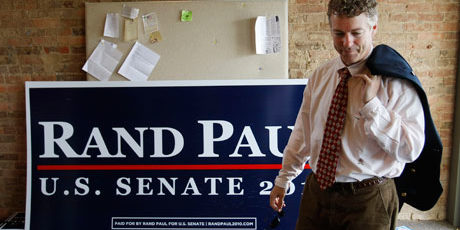 As if Israel does not suffer the slings and arrows from the Left and from many in the Democrat party, now Senator Rand Paul, who is a leader in the Tea Party movement which many of us support, has just announced that he is calling on the Obama Administration to end the $3 billion annual military support for America’s most loyal ally, democratic Israel. This was announced on the news today, January 28, 2011, even as the Arab world, including Egypt, Jordan and Yemen were aflame with violence and sliding into the embrace of jihadism and Islamism.

With Obama and Clinton uttering the most bizarre and naïve statements about the Egyptian rioting by urging Egyptian President Mubarak to “listen to the protesters and bring about reform in Egypt,” we are witnessing a foreign policy gone mad. That Obama and Clinton are unaware that these demonstration and riots are planned and orchestrated by the Muslim Brotherhood, of which Hamas is a junior partner, is breathtaking in its irresponsibility. Unless they come to their senses soon, Obama and Clinton, by their ignorance and foolishness, will be seen to have been complicit in the establishment of an Islamic Republic of Egypt. Remember the Suez Canal – the West’s lifeline – runs through Egypt. Remember Nasser in 1956 and 1967 and the Canal.

The Obama Administration and the State Department have already allowed Lebanon to be subsumed into the Islamic Republic of Iran. Jordan is a ripe fruit ready to be plucked by the Islamists and jihadists who hate the Bedouin Hashemite rulers of the largely Arab “Palestinian” population. Thus, the Jewish state is now surrounded on all sides by Islamic regimes. The two countries that Israel had peace treaties with, Egypt and Jordan, will have no further need to honor or adhere to those paper t treaties once new Islamic regimes take hold. Israel gave away 90% of the territories they had liberated from Egypt and Jordan in return for peace – albeit an Arab frigidly cold peace. Now we see what worthlessness land for peace means.

It will not only be the Gaza Strip border that is a mortal danger to Israel but the entire Negev-Sinai border. Israel’s northern border is now de facto a border with Iran and, perhaps sooner than later, the long Jordanian border will be aflame again as it was before Israel was forced to fight its defensive 1967 Six Day War with its main protagonists: Egypt, Jordan and Syria.

Israel is hated and loathed by most of the world even as it strives to seek peace with the Arab and Muslim world – a vain hope if ever there was one – so it should now immediately take the following steps to secure its security and strategic strength. Israel must at the very least retake the Philadelphi Corridor. This is the strip of land between Israel and the Mediterranean which would separate Gaza from Egypt but which Secretary of State, Condoleeza Rice, under President George W. Bush urged Israel to vacate as a gesture towards peace. Some peace!

There will no longer be a need by Hamas to smuggle in to Gaza lethal weaponry through tunnels from Egypt. An Islamic Republic of Egypt will merely send truckloads of arms openly to Hamas. Only by retaking the Corridor can Israel maintain any control over the flood of weapons and missiles deliveries to Hamas from Egypt and to all the other Muslim terror gangs operating in the Gaza Strip – including Islamic Jihad, Al Qaeda and with the increasing evidence of Hezbollah itself.

Secondly, the farce that has been the ongoing and utterly fruitless negotiations with the Palestinian Authority should be ended immediately and, with Jordan’s likely slide into an Islamic state, all of Biblical Jewish Judea and Samaria should at long last be annexed. Most of the world will still hate the Jewish state but, at least, Israel will have taken the most prudent and long overdue strategic and tactical decisions. Better to be hung as a lion than a sheep.

In this most evil world it must be understood that “the meek shall inherit the earth, but sadly six feet under.” Until the world is truly made up of a perfect United Nations and not the sham U.N. Temple of Hypocrisy that exists in all its malevolence in New York City, men and women of good will must look to their own safety. The same applies to nation states and, in today’s frightening world, it applies in particular to the embattled and increasingly besieged and friendless State of Israel. The very angels in heaven must weep at what mankind has wrought.

Of course, many will object to what I write. To them the words are just not peaceful enough. But appeasement is in the air and it is Munich all over again. Despite the clearest of all warnings, there still will be those calling for “peace now” even with an implacable and demonic enemy from whom the only peace will be that of the grave. How witheringly tragic for all humanity.

Victor Sharpe is a freelance writer and author of Politicide: The attempted murder of the Jewish state.