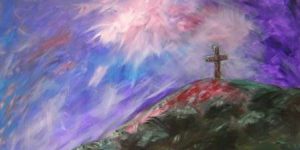 Luke 23:33, “And when they had come to the place called Calvary, there they crucified Him, and the criminals, one on the right hand and the other on the left.”

“There my burdened soul found liberty—at Calvary,” goes the chorus of a popular hymn. Every Christian immediately recognizes the place name, Calvary, as the location just outside the city gates of ancient Jerusalem where Roman soldiers executed Jesus Christ almost two thousands years ago, yet of the four gospel writers only in Luke 23:33 will one find a specific reference to Calvary in modern English translations. Writing in Greek, the language of all the New Testament books, Luke literally called it “kranion,” using the Greek word from which we get the English word, “cranium.” Actually, the word for Calvary never appears in the original manuscripts of the Bible. However, modern translators of the Bible follow the rich tradition of preferring the Latin term for cranium—“calvaria”—from which one will immediately recognize the familiar term, Calvary, and they routinely insert that place name into the text of Luke 23:33.

Another memorable hymn remembers, “On a hill far away stood an old rugged cross, the emblem of suffering and shame.” However, the New Testament never directly describes Calvary as a hill. Although a fair assumption based upon Calvary’s description as a cranium, which obviously has a rounded shape not unlike a hill, the only other possible clue in Luke’s gospel comes in Luke 23:49 where Jesus’ acquaintances and some of the women are said to be able to watch the crucifixion from afar, possibly due to Calvary’s elevation.

Today approximately 250 yards north of the Damascus Gate in eastern Jerusalem sits a bus station enveloped in the unmistakable smell of diesel fuel as Palestinians scurry to buy tickets for their rides home. Generally ignored by the locals, a steep bluff with an unusual shape rises up from the back lot of the station. In 1883 British General Charles Gordon spotted that same bluff from inside the Old City and popularized the site as the biblical location of Calvary, for two large sunken cavities in its sheer face look remarkably like the eye sockets of a cranium or skull. Although championed for a time by the Anglican Church as the location for Jesus’ crucifixion, several problematic questions persisted, leading many to doubt the site’s authenticity.

But Gordon’s Calvary, as it has come to be known, certainly stirs one’s imagination of that day when Roman soldiers chose a slow form of execution for our Lord that maximized human pain and suffering. Each breath upon the cross took enormous effort as Jesus lifted his body by pushing up on his feet and by flexing his elbows thereby forcing the weight of his whole body upon his nailed feet and causing a fiery pain. The open wounds from his earlier scourging rubbed against the rough surface of the cross with every attempt. Over time muscle cramps would make the effort even more difficult until, having exhausted his strength, Jesus died of asphyxia.

However, before his death, according to Luke’s account, Jesus audibly prayed between breaths, “Father, forgive them, for they do not know what they do” (Luke 23:34). What an amazing love that Jesus loved even his enemies to his dying breath! Thankfully I am no longer an enemy of Jesus, for I have placed my faith in him and “now my raptured soul can only sing—of Calvary.”