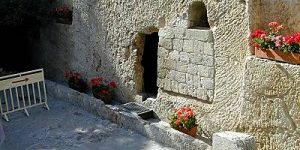 Sitting in a beautiful garden, surrounded by color and life, Mary could only think about the sorrows and confusion surrounding Jesus’ death.  In her grief she could not possibly consider leaving the garden and returning to her home in Magdala without knowing what had become of his body.  Years before he had freed her from seven demons (Luke 8:2).  He had given her a reason to live, and it seemed so wrong for him to die.  Now outside an empty garden tomb, her tears scrubbed the color from her cheeks and watered the grass between her feet as she struggled to understand what had happened.  Turning around, she saw Jesus standing there.   “Woman, why are you weeping?  Whom are you seeking?” he asked (John 20:15).

We seek so many things, such as companionship, motherhood and acceptance from our peers.  We seek money and promotions.  Homes and boats.  Smoother skin and tighter abs.  We mourn over our imperfections and our loneliness.  We ache over our losses and our failures.

But tragedy can sometimes lead to victory.  In fact, the tragedy of Jesus’ death led to our present hope of eternal life.  His body had not been moved or stolen as Mary feared.  He had risen from the dead.  He has conquered sin and death.  And now it all makes sense.  The perfect died in place of the imperfect.  To cancel my sin debt.  He died in my place.  In yours.

Only a short walk north of the Damascus Gate which leads from the Old City into the noisy streets of East Jerusalem, Christian pilgrims will find a quiet oasis of faith at the end of Schick St. known as the Garden Tomb.  Standing in stark contrast to the commercialism and political wrangling associated with the Church of the Holy Supulchre—the traditional site of Jesus’ death, burial and resurrection—and also to the sound of air brakes and the smell of diesel fuel associated with a Palestinian bus terminal just to its east, the Garden Tomb’s tranquil setting of shade trees, songbirds and colorful flowers might lead one to agree with those who have said, “If the Garden Tomb is not the true site of the Lord’s death and resurrection it should have been.”

The ancient tomb on the grounds bears a simple sign above its entrance:  “He is not here.  He is risen.”  Just as he said.  Most scholars agree that the Garden Tomb cannot be the tomb of our Savior, for it dates earlier than the time of Christ, and the Bible emphasizes that Joseph of Arimathea and Nicodemus placed Jesus in a newly cut tomb as recorded in John 19:41, which reads, “Now in the place where He was crucified there was a garden, and in the garden a new tomb.”

But the Garden Tomb, even if not the actual location of Jesus’ burial and resurrection, nevertheless stands empty as a reminder of the person of Jesus Christ who conquered the power of death and offers forgiveness of sins to all who will believe in him.  Mary embraced this truth in a quiet Jerusalem garden.  I embraced this truth in a suburban Texas church as a teen.  Today, you too can believe.   He offers you eternal life if you will believe that he died and rose for you (John 3:16).