Out of South Africa 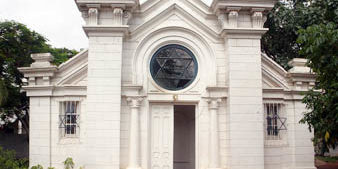 Last month I was invited to South Africa by the South African Zionist Federation. The visit, my first to the country, opened my eyes to the daunting challenges facing the country and its dwindling Jewish community of 70,000 16 years after the end of the apartheid regime.

South Africa is a country of paradoxes. On the one hand, it is exhilarating to see the blacks now in charge after their long struggle. On the other, the ruling African National Congress’ record of governance is at best a mixed bag.

On the positive side, in 2008 it peacefully and democratically replaced the failed former president Thabo Mbeki with his opponent, President Jacob Zuma.

But the negatives are glaring. Corruption is endemic. Rather than punishing officials for criminal behavior, the ANC is going after the messenger. South Africa’s ruling party intends to pass a draconian media law to bar journalists from reporting on governmental corruption. The ANC has dismissed opposition to the bill as racist, accusing opponents of attempting to advance a “white agenda.”

Auguring particularly ill for the future is the fact that ANC’s Youth League is one of the most illiberal bodies in the party. Aside from being among the most enthusiastic supporters of the move to end press freedom, the Youth League is also one of the primary forces driving foreign investors away from the country. Its leader Julius Malema’s signature policy is his demand to nationalize the country’s mines.

This has been a great year for South Africa. Throngs of tourists visited during the World Cup soccer championship, and the international press coverage was fantastic. Unfortunately, the relative safety enjoyed by World Cup tourists was a striking deviation from the norm. The ANC has failed to provide personal security for South Africans. According to the UN, South Africa has the second highest per capita murder rate in the world. South African sources place the annual murder rate at 23,000.

South Africa is the rape capital of the world. In a 1998-2000 UN survey, one in three women said they had been raped in the past year. One in four men admitted that he was a rapist. Carjackings are a commonplace.

Even more devastating is South Africa’s AIDS epidemic. Nearly 20 percent of South Africans are infected with the HIV virus.

One of the impetuses for removing Mbeki from office was that he denied that AIDS is caused by the HIV virus, claiming instead that AIDS is caused by poverty and the legacy of white oppression. Owing to this view, Mbeki refused to allow South Africa to participate in international programs to distribute anti-retroviral drugs which stem the development of AIDS.

Two years ago a team of Harvard scientists published a paper alleging that Mbeki’s actions had caused the preventable deaths of some 300,000 South Africans. They also alleged that his refusal to provide HIV-positive pregnant women with access to anti-retroviral drugs caused 35,000 babies to be born with HIV.

Neighboring Zimbabwe also suffers from South African neglect. With its international cachet and relative military might, the ANC could put an end to Robert Mugabe’s reign of terror in Zimbabwe if it desired. But Mugabe aided ANC fighters during their struggle against apartheid, and the ANC refuses to act against him.

According to the UN and other international organizations, more than two million Zimbabwean refugees have streamed across the border since 2000. But since the ANC effectively sides with Mugabe, these refugees are denied basic services like housing and health care.

Unprotected by the government, refugees are victimized by xenophobic violence. Countrywide xenophobic riots in 2008 in which some 62 people were reported killed and thousands injured have been followed by sporadic, often murderous violence against foreign refugees. Rather than protect the refugees, the ANC just announced a new visa policy that will likely see the deportation of millions of them.

ON A per capita basis, South Africa’s Jewish community was more active in the struggle against apartheid than any other nonblack group. This fact has not won the community any gratitude or friendship from the government, however. In part due to the ANC’s close ties to the PLO, the post-apartheid government has favored the country’s large Muslim community and distanced itself from the Jews. Muslims hold most of the senior positions in the civil service.

The vast majority of South African Jewry resides in crime-ridden Johannesburg. The physical insecurity of the community is palpable at all times. The Jews live behind walls and electric fences. It seems that everyone has either been the victim of a violent crime or knows someone who has. Even inside of Jewish neighborhoods, it is too dangerous for children to play in the streets.

But the schools are at risk. Some years ago Jewish school buses were stoned. The community responded by unmarking the buses. Everyone entering or leaving Jewish campuses must pass through security posts.

Community security is handled by the Community Security Organization. The day I arrived in Johannesburg, the community’s radio station received a bomb threat and the group’s representatives arrived on the scene within moments. Guards from the organization are present at all community events.

The future of the CSO is an open question. The government just passed a strict gun control law that will make it difficult for its guards to bear arms. Without guns, it is hard to see how the CSO will be able to provide protection.

Crime levels are much lower in Cape Town, and it is safe to wander around the city. But Cape Town’s Jews face other challenges, not the least of which is that whereas there are some 15,000 Jews in Cape Town, the city is home to 750,000 Muslims.

The boycott, divest and sanction Israel campaign was arguably born in South Africa at the UN’s anti- Semitic hate fest in Durban in August 2001. It enjoys the support of South African notables like retired Archbishop Desmond Tutu, who just called for the Cape Town Opera to cancel its visit to Israel.

Last month the University of Johannesburg narrowly defeated a motion to cancel its water desalination research agreement with Ben-Gurion University. However, the motion will likely be passed in the future, because while rejecting the motion, the university demanded that BGU end ties with the IDF.

A movement to ban Israeli products from the shelves of South African stores is gaining steam.

Last month a firm that produces logo briefcases refused a contract with the South African Zionist Federation to produce briefcases for the Federation’s upcoming conference.

THE JEWISH community’s responses to the challenges it faces are varied. Emigration rates are high and rising. Australia is the preferred destination, but aliya rates are also relatively high and rising. The Jewish Agency’s representatives are energetic and committed. It would be helpful if Bnei Akiva sent more representatives to South Africa in light of the religiousness of many members of the community.

On the other side of the spectrum, the number of Jews who have joined the anti-Israel chorus is growing. Jews were among the founders of an anti-Zionist, pro-boycott group called Open Shuhada Street.

The option of turning on Israel and their community is an attractive one for many young Jews. Since the end of apartheid, with the rise in influence of the Muslim community and the ANC’s hostility toward Israel, the only way Jews can achieve sure notoriety is by joining forces with Israel’s enemies.

For its part, the organized Jewish leadership struggles to remain relevant. It excels at its primary task of caring for the welfare needs of an aging community. But defending Israel and Zionism in the face of a vocal Jewish anti-Israel minority is becoming increasingly difficult. Cultivating good ties with a government hostile to Israel and committed to economic policies that hurt most members of the community is also growing more challenging.

Sadly, it seems that despite the best efforts of many committed Jewish leaders, the organized community is breaking under the burden of these Sisyphean tasks. For instance, rather than attacking anti-Semites like Tutu, who among other things claims that Israel uses the Holocaust to justify its oppression of Arabs, South African Jews have honored him by making him a patron of their Holocaust foundation. Richard Goldstone is also a patron.

In the hopes of bringing blacks to the Holocaust museum in Cape Town, the museum’s exhibition begins with a remembrance of apartheid. By doing so, the museum equates the discrimination against blacks with the genocide of Jewry.

The community’s fear of Jewish turncoats has prevented it from discrediting them. For example, at last month’s Zionist Federation conference in Cape Town, the organizers invited a self-proclaimed non-Zionist attorney named Hayley Galgut to participate in a panel titled “South African Zionism Today.” Galgut used her time to explain why she is not a Zionist, and why the audience should abandon Zionism.

Organizers defended their decision to invite her by noting Galgut’s plan to move to Israel. But the fact that she wishes to move to the front line of the war against Israel does not make hers a legitimate voice. Galgut’s presence on the panel was evidence of the community leadership’s unwillingness to take measures to maintain a coherent Zionist message.

The physical beauty of South Africa is arresting, particularly along the coast. And the material standard of living that South African Jews enjoy is impressive. It is easy to see why many Jews find it hard to leave.

But it is also clear that Jewish life in South Africa will only get worse. The ANC is unlikely to improve its general governance or its policies toward Israel. It can only be hoped that the Jews of South Africa will make their way to Israel before the ANC fails them even more spectacularly than it already has.