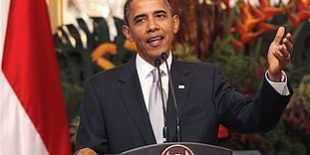 by Jerusalem PostUS President Barack Obama criticized Israel on Tuesday at a news conference in Indonesia, following Monday’s announcement that Israel has advanced plans to build 1,345 homes in east Jerusalem.

“This kind of activity is never helpful when it comes to peace negotiations,” Obama said during a visit to Jakarta.

“Israeli unilateralism is a call for immediate international recognition of the Palestinian state,” he said, according to a Reuters report.

Earlier, EU foreign policy chief Catherine Ashton added her comments on the issue, saying she is “extremely concerned by the announcement that Israel plans to go ahead with the construction of 1,300 new housing units in east Jerusalem,” in a statement.

“This plan contradicts the efforts by the international community to resume direct negotiations and the decision should be reversed,” the statement read.

The news that planning will go ahead for these housing units in Har Homa and Ramot came on Monday as Prime Minister Netanyahu was in the US, and under pressure to halt settlement construction in the West Bank and in east Jerusalem.

Although the homes in question have not yet been fully authorized, they have been approved by the local and district planning committees.

The United States issued a swift official response to Monday’s announcement, saying they were “deeply disappointed” at the plans to build in “sensitive areas” of east Jerusalem.

Referring to the stalled Israeli-Palestinian talks, P.J. Crowley told reporters that the US views the announcement as “counter productive to our efforts to resume direct negotiations between the parties.”

“We have long urged both parties to avoid actions that could undermine trust, including in Jerusalem, and we will continue to work to resume negotiations,” Crowley said.

He added that the issue would be one of the talking points when US Secretary of State Hillary Clinton meets in New York on Thursday with Prime Minister Binyamin Netanyahu.

Jonah Mandel, Tovah Lazaroff and AP contributed to this report.