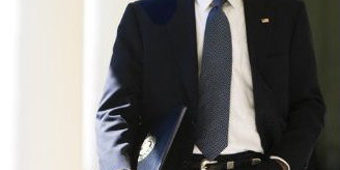 Former US president George W. Bush indicates that both Ehud Olmert and Mahmoud Abbas were willing to publicly back Olmert’s proposed peace agreement before Olmert’s ouster as prime minister ruined the deal, according to a memoir to be released on Tuesday.

Bush also excoriates the US intelligence agencies that famously concluded in late 2007 that Iran had halted production of a nuclear weapon, denying him any possible military option, and notes that he rejected an appeal by Olmert earlier in the year to bomb a Syrian nuclear facility.

“We devised a process to turn private offer into a public agreement,” Bush writes of the secret peace deal worked out between the then-prime minister of Israel and Palestinian Authority president. “Olmert would travel to Washington and deposit his proposal with me. Abbas would announce that the plan was in line with Palestinian interests. I would call the leaders together to finalize the deal.”

That agreement was to include handing over the “vast majority” of the West Bank to the Palestinians, building a tunnel to connect it to the Gaza Strip, allowing a “limited number” of Palestinian refugees into Israel, establishing Jerusalem as a joint capital and entrusting control of the holy sites to “a panel of nonpolitical elders.”

But then Olmert was forced to resign his premiership because of corruption allegations, and Abbas “didn’t want to make an agreement with a prime minister on his way out of office,” Bush relates.

The 497 pages of Decision Points detail the difficult choices Bush made over the course of his two-term presidency, including on Iraq, Afghanistan and the economic crisis. While he occasionally expresses compunction, as when he acknowledges, “I regret that I ended my presidency with the Iranian issue unresolved,” he mostly justifies the decisions he made and draws positive lessons even from adverse outcomes.

Even though the peace deal between Olmert and Abbas was never sealed and has been followed by many more months of stalemate, Bush says that at the same time as he felt disappointment that an agreement hadn’t been reached, “I was pleased with the progress we had made.”

When it comes to his push to include Hamas, considered a terrorist organization by the US, in the Palestinian Legislative Council elections of 2005 – which the Islamist movement won – Bush remains resolute.

“America could not be in the position of endorsing elections only when we liked the projected outcome,” he explains, adding that the vote “forced a decision in Hamas” about whether it would govern or revert to violence.

Following Hamas’s coup in Gaza in 2007, Bush notes his support for Israel’s blockade excluding only the most basic humanitarian needs from Gaza so Palestinians there “would see a vivid contrast between their living conditions under Hamas and those under the democratic leader, Abbas.”

Bush’s tone is less sanguine when it comes to Iran and the first presidential election of Mahmoud Ahmadinejad, with his professed messianism combined with verbal attacks on Israel and the Holocaust. “I started to worry we were dealing with more than just a dangerous leader. This guy could be nuts.”

Amid his rising conviction that Iran was pursuing a nuclear weapon, Bush settles on a policy of sanctions and multilateral diplomacy while stressing, “Military action would always be on the table, but it would be my last resort.”

But he expresses outrage at learning that his own intelligence agencies had undercut that option.

He describes the “eye-popping declaration” on the 2007 National Intelligence Estimate judging with “high confidence” that Iran had halted its nuclear weapons program.

“Israel and our Arab allies found themselves in a rare moment of unity. Both were deeply concerned about Iran and furious with the United States over the NIE,” he says of the report’s immediate backlash.

Bush told King Abdullah of Saudi Arabia soon afterward, “The NIE was produced independently by our intelligence community. I’m as angry about it as you are.”

Bush speculates that the intelligence agencies were trying to avoid the mistakes made in Iraq – when they had been over-zealous in their intelligence conclusions – but he concludes, “whatever the explanation, the NIE had a big impact – and not a good one.”

Bush writes positively about the importance of the US relationship with Israel and the Jewish state’s justified concerns over its security, relating how a helicopter ride he took with Ariel Sharon, “a bull of a man,” in 1998 while he was governor of Texas made him “convinced that we had a responsibility to keep the relationship strong.”

At one point his mother, former first lady Barbara Bush, even referred to him as the first “Jewish president” after his landmark speech in 2002 calling for a democratic Palestinian state run by a new leadership, i.e. not by then-president Yasser Arafat.

“Shortly after the speech, Mother called,” Bush relates. “‘How’s the first Jewish president doing?’ she asked. I had a funny feeling she disagreed with my policy. That meant Dad probably did as well.” Even so, Bush “laughed off the wisecrack,” though he knew he was in for criticism for taking a position his vice president, secretary of defense and secretary of state opposed.

Still, Bush doesn’t shy away from pointing to disagreements he had with Israel during his tenure, including criticism of Olmert’s handling of the Second Lebanon War in 2006.

Bush notes that he was supportive of Olmert going after Hizbullah following its cross-border attack on IDF soldiers.

He also held the international community at bay to give time for Israel to badly damage the terrorist group and its backers in Damascus and Teheran.

“Unfortunately they mishandled their opportunity,” he says, pointing to Israel bombing campaigns “of questionable military value,” including of sites in northern Lebanon.

“Removing the threat of retaliation let Syria off the hook and emboldened them to continue their support for Hizbullah,” he chides. Eventually, as more of the world shifted against Israel, Bush lifted his opposition to a UN-brokered cease-fire, to avoid alienating the international community he wanted to join him in isolating Syria and Iran.

His esteem for Israel’s military capabilities was only restored after, he states, Olmert authorized a pinpoint operation on a nuclear site Syria was constructing in 2007. Bush describes how Olmert urged the US to take out the target, but Bush wanted to use diplomacy instead to pressure Syria.

Once the attack was completed, Bush urged Olmert to make it public to use it against Damascus, but Olmert wanted to keep it quiet so as not to provoke a Syrian backlash.

“This was his operation, and I felt an obligation to respect his wishes. I kept quiet, even though I felt we were missing an opportunity,” Bush writes.

“The bombing demonstrated Israel’s willingness to act alone. Prime minister Olmert hadn’t asked for a green light and I hadn’t given one. He had done what he believed was necessary to protect Israel,” Bush writes.