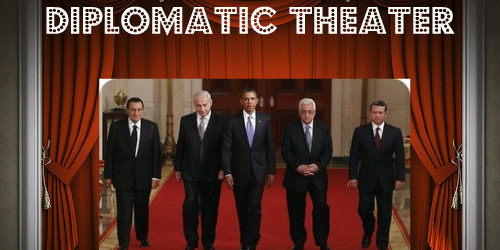 The current flurry of diplomatic activity is deeply disturbing. It isn’t simply that the Obama administration has strong-armed Prime Minister Binyamin Netanyahu into participating in diplomatic theater with the PLO whose successful completion will leave Israel weaker and less defensible. It isn’t merely that the newest “peace process” diverts our leadership’s attention away from Iran and its nuclear weapons program.

The most disturbing aspect of the latest round of the diplomatic kabuki is that Israel’s leaders and Israel’s staunch friends in the US are enthusiastically participating in this dangerous project.

True, Netanyahu is in an unenviable position situated as he is between US President Barack Obama’s rock and hard place. Instead of standing up to this hostile American leader, Netanyahu is desperately seeking a magical concession to get Obama off his back.

Netanyahu’s preference for appeasement is both ironic and destructive. It is ironic because he has turned to appeasement at the very moment that the notion is possible to appease Obama has self-destructed.

Ten months ago Netanyahu found what he hoped was a magic concession. Capitulating to Obama, the Jewish state’s leader prohibited all Jewish building in Judea and Samaria for a period of ten months. This unprecedented move to discriminate against Jews was supposed to get Obama off Netanyahu’s back. It didn’t.

Obama’s public demand this week that Netanyahu extend the abrogation of Jewish property rights shows he will not be appeased. There is no magic concession. Every concession to Obama — like every Israeli concession to the Arabs — is considered both permanent and a starting point for further concessions.

And so Netanyahu concedes more. Not only has he effectively agreed to extend the discriminatory ban on Jewish rights. Netanyahu has moved on to even more outrageous concessions. According to the Lebanese media, Netanyahu has agreed to surrender large swathes of the Golan Heights to Iran’s Arab puppet, Syrian dictator Bashar Assad. According to the reports, Netanyahu empowered Obama’s emissary George Mitchell to present his offer to Assad in Damascus and even furnished Mitchell with detailed maps of his proposed surrender.

If Netanyahu thinks that this move will diminish US pressure for a full withdrawal from Jerusalem and Judea and Samaria, he is in for an unpleasant surprise. Mitchell made this clear at his press conference Wednesday. Mitchell said the “two tracks can be complementary and mutually beneficial if we can proceed to a comprehensive peace on more than one track.”

In plain English that means that the administration feels perfectly comfortable pressuring Israel to surrender to the Syrians and to the Palestinians at the same time.

Leaving aside the strategic insanity of surrender talks with Syria, it cannot be said too strongly that the talks with the Palestinians have absolutely no upside for Israel.

Many observers have pointed out that PLO leader Mahmoud Abbas is unlikely to make a deal. And this is probably true. With Hamas in charge in Gaza and widely supported in Judea and Samaria, Abbas will probably not risk signing a peace deal with Israel that will likely serve as his death warrant.

But the same observers who bemoan the poor chances for a treaty ignore the fact that the alternative — that Abbas signs a peace deal with Israel — would be a disaster for Israel. Any deal Israel signs with the PLO will make the country weaker. We know this because we have already signed deals with the PLO. And all of those deals made Israel weaker.

All the agreements between Israel and the PLO have been predicated on Israeli territorial surrenders and Palestinian promises of moderation. Israel has implemented its commitments and surrendered land to the PLO. The PLO has never abided by its commitment to moderate its behavior. To the contrary, the PLO’s response to every agreement has been to escalate its political and terror war against Israel.

The Palestinian terror war that began in September 2000 was the direct result of the Oslo “peace” agreement of September 1993 that created the framework for Israeli land surrenders to the PLO, and the framework agreement’s follow-on agreements. The terror attacks that have killed and wounded thousands of Israelis would never have happened — indeed they would have been inconceivable — had Israel not withdrawn from Gaza, Judea and Samaria in accordance with peace deals it signed with the PLO.

The track record of the past 17 years demonstrates that withdrawals are dangerous. But still the “peace deal” now on offer is predicated on withdrawals.

Obama and his advisors claim that these talks will improve Israel’s relations with the wider Arab world. But again the last 17 years expose this claim as fatuous and wrong. Israeli land surrenders in exchange for pieces of paper have not convinced the Arab League member states to accept Israel as a permanent state in the Middle East. They have convinced Israel’s Arab neighbors that Israel is weak and getting weaker. This in turn has signaled to the wider Arab world that its best bet is to join forces with the likes of Hamas and fund and otherwise actively support the war against the Jewish State.

Engaging in the phony “peace process” isn’t only bad because there is little prospect for reaching and deal or because any potential deal would be a disaster for Israel. There are three additional reasons the government’s decision to engage in this diplomatic psychodrama is terrible for Israel.

First, there is great harm in talking. Talking to Abbas and his deputies legitimizes a Palestinian leadership that is wholly committed to Israel’s destruction. As Abbas and his mouthpieces make clear on a daily basis, they do not accept Israel’s right to exist. They do not condemn or oppose the murder of Israelis by Palestinians. They will not accept a deal with Israel that leaves Israel in control over sufficient lands to defend itself from Palestinian or other Arab attacks in the future. And they will never end or abate their diplomatic war against Israel.

The very act of legitimizing the likes of Abbas expands their ability to wage diplomatic war on Israel.

Second, just as Netanyahu’s magic concessions to the Americans are but a starting point for further magic concessions, so Israel’s willingness to engage in talks with its Palestinian adversaries forces our leaders to concede still more important things to maintain them. For instance, today in the face of a clear Hamas terror offensive that has already claimed the lives of four Israelis and sent tens of thousands running for cover in bomb shelters, Israel is compelled to sit on its hands. An effective campaign against Palestinian jihadists would weaken the PLO because most Palestinians support the jihad against Israel. In the interest of “peace,” Hamas is allowed to attack at will.

So simply by agreeing to talk with the Palestinians, the government has made it all but impossible to carry out its primary function — defending the country and its citizens from aggression.

Recognizing this, the Obama administration has insisted that the content of the current talks remain hidden from the public. As far as Obama and Secretary of State Hillary Clinton and Mitchell are concerned, they are better judges of the prospects and wisdom of these talks than the Israeli public that will have to live with their consequences. By agreeing to these demands, Netanyahu is collaborating with a project that is inherently anti-democratic and harmful to Israel’s political order.

There is another aspect of the current diplomatic season that is upsetting. This aspect involves the negotiations’ deleterious role in shaping Israel’s position and options in the US.

When Netanyahu announced he was caving to White House pressure and barring Jewish construction in Judea and Samaria last November, his defenders argued it was necessary given Obama’s relative political strength at the time. But a lot has changed in the past ten months.

Today Obama is deeply unpopular. The Democrats are likely to lose their control over the House of Representatives, and at a minimum, their hold on the Senate will be diminished. Today Israel has nothing to gain and much to lose by bowing and scraping before Obama.

True, Obama’s positions on issues relating to Israel are not likely to substantively change after November 2. But Obama’s ability to implement his policies will be seriously constrained. Indeed, the anticipated Republican resurgence has already incapacitated him.

By playing along with Obama’s sham peace talks, Netanyahu has made it difficult for Israel’s supporters in the US to explain why these talks are dangerous and offer a counter-policy that is based on experience and reality. Even worse, Netanyahu has encouraged Israel’s friends to support what Obama is doing.

This much was made clear by an article penned last week by syndicated columnist Charles Krauthammer titled, “Your move, Mr. Abbas.”

Krauthammer is widely perceived by the American public as a firm supporter of Israel. His many readers — who by and large are not close observers of Middle East events — defer to his judgment.

Unfortunately, his latest column shows that trust is unfounded. Krauthammer wrote, “No serious player believes can hang on forever to the West Bank.”

Not only do many serious players believe Israel can — and indeed should — hang on forever to Judea and Samaria, most close observers of events in the Middle East recognize that the central lesson of the past 17 years is that Israel must hang on to Judea and Samaria. The partial territorial surrenders Israel conducted in the 1990s led to the murder of more than a thousand Israelis. Ceding these areas entirely would imperil the country. Even Clinton acknowledged this week that the current situation can continue for thirty years. And as all close observers and serious players in the Middle East know, thirty years is tantamount to forever.

Given Krauthammer’s tremendous influence in shaping public opinion and policy in the US, his arrogant and false portrayal of reality is debilitating. This is particularly true in the current electoral season where Americans are seriously questioning the received wisdom of their policy elite for the first time in a generation. Now not only will Israel’s supporters need to battle the administration for the US to adopt a rational policy towards the Palestinians and Israel. They will need to battle their supposed allies on the Right.

But while devastating, Krauthammer’s position is a side issue at the end of the day. Krauthammer is not the man charged with defending Israel. He’s a newspaper columnist and television commentator.