Rev up the bulldozers 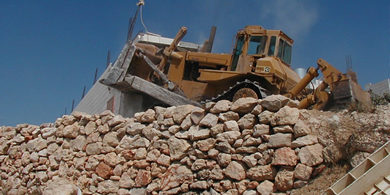 For the first time in nearly two years, Israel and the Palestinian Authority will be resuming direct negotiations in Washington this week, amid a great deal of fanfare.

In a clear sign of the occasion’s significance, President Barack Obama personally set aside several hours between his frequent vacations to host the restart of the talks, while former British prime minister Tony Blair abandoned the lucrative lecture circuit for a few days to attend the ceremony.

Can this possibly just be business as usual? With all the clinking of champagne glasses at the festive diplomatic dinner, and the inevitable poses for the political paparazzi, some might be tempted to get swept away by all the hope and change that seems to be in the air.

After all, the diplomatic process has been stalled for some 20 months now, and the fact that Israel and the PA leadership are again looking at each other across a table clearly marks an advance in the right direction.

Or does it? Before you get too excited, consider the following.

Even before the talks began, PA President Mahmoud Abbas was already at work blaming Israel for their imminent failure. In a speech in Ramallah on Sunday, he said, “I clearly state today that we notified the Americans and international officials that Israel will bear sole and full responsibility for the collapse of negotiations should settlement building continue.”

Like a bride placing a call to her divorce lawyer as she comes down the aisle, Abbas is laying the groundwork for a letdown. Before setting foot in the American capital, he was effectively trying to compel Israel to extend the 10- month freeze on construction in the Jewish communities of Judea and Samaria that is due to expire on September 26.

BY ASSERTING a linkage between settlement building and the continuation of talks, Abbas is seeking to impose unilateral preconditions on the conduct of the negotiations.

This, of course, is completely unacceptable and should be met with a straightforward, yet firm response. In other words, it’s time for the Jewish state to rev up the bulldozers. Let’s start building again throughout the length and breadth of Judea and Samaria.

This is the only way to ensure that the Palestinians will at last understand that they cannot decree the outcome.

Sure, you might be thinking, but then won’t Israel be giving Abbas precisely the excuse he wants to storm away from the talks? But the question itself contains the answer. For if Abbas is already looking for a pretext to walk out, what is the point of negotiating with him in the first place? If he isn’t serious about talking, why on earth should we be? Like it or not, if the diplomatic process is to have any chance of succeeding, then Israel cannot, and must not, allow the Palestinians to think they can dictate what its policy should be, whether via threats, pressure or intimidation.

The last thing Israel, or the process itself, can afford is for the Jewish state to exude a further sense of weakness or frailty. Time and again, since the start of the Oslo track in 1993, concessions and capitulation have only invited a more aggressive Palestinian stance.

It is time to break the cycle of submission, and underline our right to each and every part of this precious land.

For far too long, the Left and the media have fed us the mantra that “settlements are the obstacle to peace.”

Despite the rhetoric, they never have been. Not once.

The true obstacle to peace remains what it has always been: the Palestinian refusal to accept a permanent and sovereign Jewish presence in the land of Israel.

Palestinian leaders continue to harbor fantasies of annihilation, which is why they have been loath to accept even the most generous of Israeli offers.

Indeed, it wasn’t a lack of Israeli generosity that torpedoed peace, but an excess of Palestinian audacity.

And that is one reason why settlements are so important: They disabuse the Palestinians of their deeply-held notion that Israel is a temporary phenomenon.

Think about it: Every red-tiled Israeli roof that is erected on the outskirts of Ramallah, every Hebrew hothouse that goes up south of Hebron, is a tangible reminder to Abbas and his colleagues that the Jewish people are back to stay.

If each time they look out their windows, the Palestinian leadership is faced with a steadily growing Jewish horizon, they will be forced to accept this basic truth.

Then, and only then, will peace have a chance.

Personally, I believe Israel should expand Jewish communities in Judea and Samaria because of our divinely-given right to these areas.

And I do not want Israel to give up control over any part of our ancestral patrimony.

But the bottom line is that wherever you stand on the question of territory – Right or Left – settlements serve to advance Israel’s values and interests.

So let’s get those engines going and start pouring some more concrete.

Both because it is good for Israel and, ironically, also for peace.