The story of two Alexes appeared to me from old photographs, new documents, all kinds of papers, maps, clips, and fact leads of my ongoing art historical research with regard to the art looted by the Nazis during World War II, and on my family history as well. This time, the scene of the events is Paris in the early 1940s, and thereafter, when the war was just over. 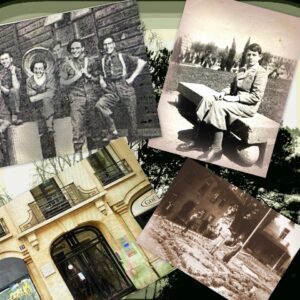 My research has brought me to the heart of the Paris 8th arrondissement, to the street which runs in parallel with Boulevard Hausmann starting from the Place Saint Augustin and ending at the Champs Elysees. It is rue la Boetie, the very heart of central Paris. The street was also very much the heart of the French art life in the last century. Businesses, storages, houses of the leading art dealers were situated there. Wildenstein, Bernheim, Rosenberg, the creme a la creme of the French, Parisian and actually the world art dealers had been living and working on this street which I came to research in close detail.

Coming out of the dramatic events from 80 years back, the destinies of two Jewish Parisian boys have resurfaced in front of me, in both striking and thoughtful parallel. Two Alexes of the same age and with a similar background, they both were thrown into the fire of the Kurban, as the Holocaust survivors were calling the Catastrophe for many years after it had happened. Both boys took their stand with a great bravery and determination.

Three months before the Nazis marched into Paris, almost all of the Paul Rosenberg family had left the capital. The dealer’s brother was staying ( he died in 1947 after all that he, his family and his brethren went through) , and Paul’s son Alex went to England to fight against the Nazis. He did it bravely, fighting with the French 2nd Armoured Division of the Free French Forces during the all years of the war in the world’s different locations.

Doctor Bujanover’s family did not leave Paris. They were in Resistance. Alex’s mother, my great-aunt Eleanor was helping the Resistance in a big way despite mortal danger for herself and the family. The couple’s just 15-year old daughter Eleanor ( the name went down in that family for its women in one generation after the other) was very active in Resistance youth, the same as her a bit older brother. At a certain stage, towards the end of 1942, Alex has become too close to real danger, and he had to escape via the Resistance route to Switzerland. I found the documents about it at the US Holocaust Museum Archive in Washington D.C. Continue Reading….