Israel: An Environmental Wonder Making Its Deserts Like Eden 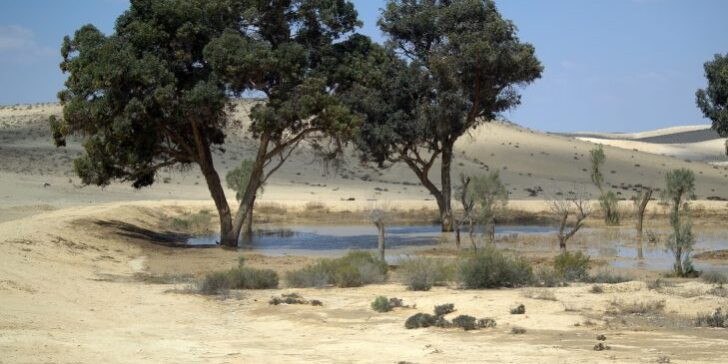 In Israel, the Holy Land, the earth itself is indeed Holy! The earth where Jesus walked overflows with flowers and vineyards that depict nature as a visual symbol of rebirth. With the profusion of emerging plants and vast flocks of migrating birds, the renewal of spring is draping itself not only over the land but in the sky. God’s promises are abundant, too.

Isaiah, who could be considered a biblical prize-winning prophet of Nobel-like stature, transmitted our Creator’s words in chapter 35:1-2: “The desert and the parched land will be glad; the wilderness will rejoice and blossom. Like the crocus, it will burst into bloom; it will rejoice greatly and shout for joy.” The prophet goes on to write, “For I will pour water on the thirsty land, and streams on the dry ground” (Isaiah 44:3).

Israel is an arid land, upwards of 60 percent desert. How did God bring/transform His ancient land to the modern environmental miracle it is today? First, Israel’s environmental beauty flows through the Jews, originating with God’s biblical covenants about their Promised Land. In Genesis 17:19, God tells Abraham that Sarah will miraculously birth Isaac: “I will maintain My covenant with him as an everlasting covenant for his offspring to come.” The Bible includes more than a thousand verses bolstering the fact that God connected the Jews with the land, the earth.

Fast forward from God’s almost 4,000-year-old promises to the year 1910, when the land was called “Palestine” under the British Mandate—nomenclature that continued until 1948. The first communal settlement (kibbutz in Hebrew) was established south of the Sea of Galilee. Young Jewish men and women—mostly from Eastern Europe—responded with hopeful hearts to a movement that officially began in 1897 at the First Zionist Congress. Theodore Herzl, the visionary Hungarian-Austrian writer, had famously authored Der Judenstaat (The Jewish State) in 1896. The following year, he convened the first Zionist Congress in Basel, Switzerland. He is considered the Father of Zionism.

From about 1908 to 1910, several significant milestones materialized. Degania (Hebrew for grain and flowers) holds the distinction as the first kibbutz set up by young Jewish pioneers. Greeted by scenes of unhospitable sand, deserts, and swamps, they faced a formidable task. Not schooled in agricultural skills and beset by mosquitoes in malaria-ridden swamps, these pioneers determined to forge ahead anyway, learning how to farm and survive.

Using shovels, plows, and rakes, the sacrifices of the early “kibbutzniks” (members) of the kibbutzim (plural) laid the foundation for the Jewish state’s modern rebirth in 1948. They developed close-knit communities where they highly valued work, ate together, shared resources, and gave freely to one another. They relied on the principle, “to each according to his/her need.” In the early kibbutzim, they ran a direct democracy where each decision was made by all members. Continue Reading….