PA: Balfour the devil has horns and fangs 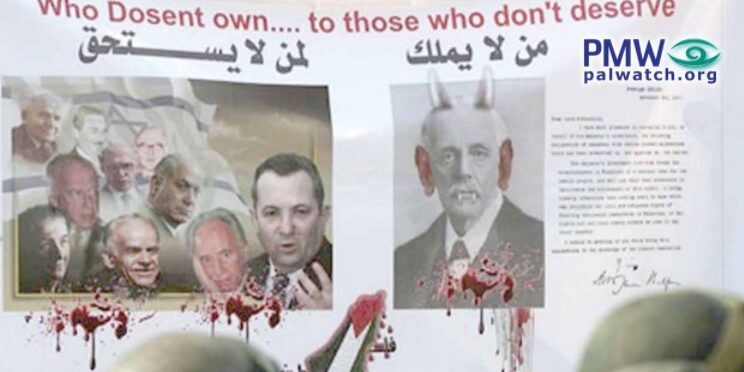 Today, on the anniversary of the Balfour Declaration, the PA portrayed Arthur Balfour as a devil with horns, fangs, and large red ears.

In 1917, Arthur Balfour, then British Foreign Secretary, wrote the letter stating that Britain was in favor of “the establishment in Palestine of a national home for the Jewish people.” This was later adopted by the League of Nations, which made the British Mandate “responsible for putting into effect the declaration,” leading to the UN vote in favor of partitioning Mandatory Palestine into a Jewish state and an Arab state in 1947.

Every year, PA leaders condemn the Balfour Declaration as “the ominous promise,” “the most despicable plot,” and “a crime against humanity,” as Palestinian Media Watch has documented, and this year the PA is sticking to tradition.

In the official PA daily, the PA put a bloodstained image of a poster with a distorted image of former British Foreign Secretary Arthur Balfour together with a collage of images of Israeli Prime Ministers David Ben Gurion, Moshe Sharett, Levi Eshkol, Menachem Begin, Yitzhak Rabin, Benjamin Netanyahu, Golda Meir, Yitzhak Shamir, Shimon Peres, and Ehud Barak, with an Israeli flag behind them.

The accompanying article refers to the declaration as “the ominous Balfour Promise,” and goes on to describe it as “the West’s first step towards establishing an entity for the Jews on the land of Palestine, while acceding to the desires of global Zionism at the expense of a people that has been rooted in this land for thousands of years.”

PLO Executive Committee member and Chairman of the PLO Department of Refugee Affairs Ahmad Abu Houli said in a press release that the Balfour Declaration “is illegal,” and “the crime of this era,” leading to “the greatest historical injustice.” Continue Reading…..