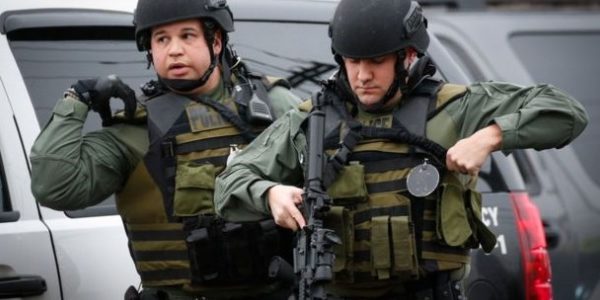 A Jewish supermarket in New Jersey was the target of a gun attack which left six people dead including two suspected assailants, say officials.

No motive has been confirmed, but the mayor of Jersey City tweeted that “hate and anti-Semitism” had no place in the city.

The suspects are believed to have killed a detective across town, then driven a rental van to the store.

Security video shows them firing on the market before going inside.

An additional victim was injured, but managed to escape, authorities said on Wednesday.

The mayor of Jersey City, Steven Fulop, told reporters that street cameras showed two people “slowly” drive towards the market, then “calmly open the door with two long rifles and begin firing from the street” into the shop.

Public safety director James Shea said video showed they parked their van “and immediately began firing on the location”. Asked how police were certain that the shop was targeted, he said the men had “bypassed” many other people walking on the street to attack the store.

The attackers have been identified as David Anderson, 47, and Francine Graham, 50. Continue Reading….