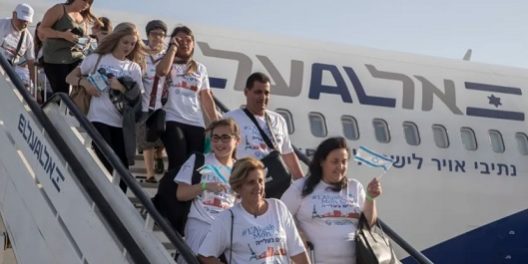 Immigration to Israel rose by more than a quarter in the first half of 2019, fueled almost entirely by a continued surge in aliyah from Russia, according to internal Jewish Agency figures. In all of 2018, immigration showed a modest gain of 5 percent.

A 73 percent increase in the number of individuals moving to Israel from Russia between January and June more than compensated for drops in aliyah from many other countries — most prominently France and the United States. Indeed, Russian immigrants accounted for more than half (51 percent) of the total. In 2018, the increase in emigration from Russia was just under 50 percent.

The figures show that in the first six months of 2019, 16,019 individuals from around the world immigrated to Israel — an increase of 28 percent from the same period in 2018. This includes 616 members of the Falashmura community, descendants of Ethiopian Jews who were forced to convert to Christianity, whose aliyah had been suspended for a period of several years. Excluding the Falashmura, the half-year aliyah figures were up 23 percent.

According to Israel’s Law of Return, an individual must have at least one Jewish grandparent, be married to a Jew or have converted in an established Jewish community to be eligible for aliyah. An individual is defined as Jewish by halakha (Jewish law) if he or she was born to a Jewish mother or converted by an Orthodox rabbi recognized by Israel’s Chief Rabbinate. It follows that an individual does not have to be halakhically Jewish to move to Israel.

The vast majority of immigrants arriving from Russia in recent years, according to demographic experts, are not halakhically Jewish. As a result, they are not allowed to marry in Israel unless they undergo Orthodox conversions, which most refuse to do. Roughly 350,000-400,000 Russian-speaking Israelis fall into this category, accounting for a disproportionately large share of those emigrating from Israel in recent years. Continue Reading…